Are Russian Hypersonic Weapons Leading to A New "Sputnik" Moment? 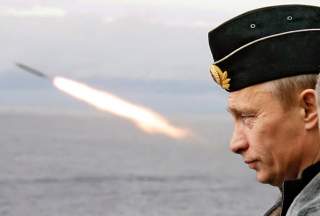 Behind a clean, white, columned facade sits Moscow’s Manezh Exhibition Hall, a stately gathering place for Russia’s political, social, and religious elites, just a short stroll from Red Square. It was here, during his March 1, 2018 state of the nation address, President Vladimir Putin unveiled Russia’s wonder weapons: hypersonic missiles and supermaneuverable gliders capable of dispatching intercontinental targets at speeds exceeding Mach 5 (five times the speed of sound) in two hours or less. With his reelection only a few weeks away, the president pinned Russia’s very existence to staying one step ahead of the Americans. “Technological changes are happening at an increasing speed,” said Putin, “and those who take advantage of this new technology will launch forward. Those who are unable to do that will be buried under this tide of technological progress.” On a giant projection screen, the leader’s image ominously loomed over an adjacent press gallery. “Being backward technologically means undermining the capabilities of your country, and eventually, losing your sovereignty.”

To demonstrate, Putin combined live action test footage with computer graphics in a series of videos. The first featured the hefty MiG-31 Foxhound, lofting a four-ton hypersonic Kinzhal (Dagger) from its underside into a U.S. Ticonderoga-class warship. Then came the Avangard (Vanguard) hypersonic glide vehicle—a curious weapon with potentially dangerous implications. The Avangard will likely be helped into the atmosphere by a giant rocket like the RS-28 Sarmat intercontinental ballistic missile (ICBM). Putin featured the Sarmat carrying a cluster of nuclear warheads destined for the Florida panhandle, home of President Donald Trump’s Mar-a-Lago Resort. A Russian ICBM makes a very high, predictable arc upon launch, making it comparatively easier to detect and intercept. But the Avangard is far more devious because it ejects from its rocket, then dives sharply. Armed with a nuclear warhead and sheathed in hot plasma, it tightly hugs Earth’s curvature while nimbly careering around missile warning systems at twenty times the speed of sound—which roughly works out to 15,000 miles per hour. At that speed, the weapon has enough power to sink the Southern White House along with half of the Sunshine State.

Back in Washington, hypersonic research had experienced a slight, but unfortunate resurgence in the last decade. Test platforms, like the Falcon in 2010 and 2011 failed, the Pentagon lost interest, and Congress aborted the program’s funding. Some senior officials within the Defense Department felt they turned their backs too soon. “We had a couple of failures, so we kind of stopped and regrouped to look at the overall structure, to make sure we understood the technology–what was working, what was not working,” Air Force Gen. John E. Hyten, the commander of the U.S. Strategic Command, said in an interview with the Washington Post. “From my perspective, I’d have liked to have just learned from that mistake and keep going. Don’t stop.”

It isn’t as if DARPA’s engineers are starting from scratch. Hypersonic weapons research dates back a century, to a time when Eugen Sänger dreamt of Silbervogels (silver birds) that could travel at Mach 10 and just sixty to seventy feet off the ground. NASA’s X-15, which flew in 1959, bore some resemblance to Sänger’s silver bird design. As the fields of spacecraft and rocketry advanced, Sänger’s rival Wernher Von Braun, a significant figure in the years leading up to the U.S.-Soviet Space Race, dealt with the problem of rocket reentry vehicles flying (and plummeting) at hypersonic speeds. Even the Space Shuttle, as The Economist wryly observed in April, was a kind of hypersonic vehicle. Experience has taught the key to bring anything back to Earth—living or not—is a tough exterior, capable of withstanding the extreme temperatures a launch generates.

Intense heat beyond 2,200 degrees celcius gathers quickly in space, so the Kinzhal or Avangard, like any reentry vehicle, would have to be made of composite carbon fiber materials, or resins resistant to cracking and bending, and coated with chemicals that resist peeling or oxidation. They also could be made of titanium, which is relatively lightweight or made of alloys that mix titanium with nickel, aluminum, or cobalt. Control systems’ wiring, without adequate shielding or insulation, could melt away. Computer processors, if they haven’t overheated in flight, will have to compensate for every surface vibration, every shudder, to keep the missiles on course and under strict control after their fatal nose-dive descent. Putin’s clever mix of real and contrived footage could be misleading, though he reassured his audience that Russia’s hypersonic weapons are real, and work quite well. Still, it is uncertain if the missiles are just hype, not to mention resistant to all the other factors as they bounce about the lower atmosphere unpredictably. Otherwise, they erupt into fireballs and disintegrate like ineffectual meteors across the sky.

Still, prudent Americans ought to err on the side of taking the Russian president’s speech seriously and mark it as a turning point in their security. We arrived at a similar place on October 7, 1957, when the Soviet Union launched a 187-pound satellite into orbit around the Earth—Sputnik-1. The dawn of the Space Race jolted the nation from its scientific torpor. Long before today’s internet, newspapers, magazines, and most of all, that nascent medium television were forums where a great debate between scientists, politicians, military men, and university presidents took shape, all of them asking: How did the Soviets get ahead? Why? How can the nation possibly catch up? Scientific communities, once seen as breeding grounds for subversive thought during the Red Scare of the 1950s, enjoyed newfound respect from their fellow citizens, who held them up as untapped strategic resources. Pulitzer Prize-winning writer Richard Hofstadter wrote that almost overnight “the national distaste for intellect appeared to be not just a disgrace, but a hazard to survival.” From 1957 to 1962, the United States successfully launched nearly six times as many rockets as the Russians, according to Air Force data from the period. American and Soviet rocketeers urgently carried the moon’s first would-be colonizers into space—plants and insects first, then rats, canines, and chimpanzees. U.S. probes also brought back the earliest pictures of the lunar surface, surveyed Earth’s magnetic fields, and took Venus’s first environmental readings. President Dwight Eisenhower’s focus on space carried over to John Kennedy’s presidency and America’s engineers set their sights on completing the hard task of landing a man on the moon fifty years ago this July.

In short, Americans felt they were being bested by Russia, and they simply wouldn’t let its invitation to compete pass them by. The era’s history teaches us that with enough indignation, America’s engineers and scientists can accomplish some wondrous things, provided its citizens are willing to ignore the possibility of failure and unify morally and politically behind them. Putin’s words and the images he used in his speech last year were provocative to be sure—and Americans ought to be as indignant today as they were in years gone by.

Hindsight brings clarity of course, and Congress’ cancellation of previous hypersonic efforts was obviously a mistake. Granted, these programs are high-risk ventures and fiscally minded politicians at the time probably thought cutting off funding was the right thing to do. Washington’s weapons programs have a nasty reputation for lengthy timelines and extreme cost overruns. In the meantime, the United States may have “lost [its] technical advantage in hypersonics,” as Vice Chairman of the Joint Chiefs of Staff Gen. Paul Selva said, “but we haven’t lost the hypersonics fight.” The legislature will consider the Department of Defense’s $2.6 billion request for hypersonic programs in the upcoming fiscal year. Our withdrawal from the Intermediate Nuclear Forces Treaty, while a sad development for the cause of peace, paves the way for missiles like the Falcon to fly once more. And with Forever Wars in Afghanistan and Iraq fading farther behind us, hypersonic weapons research might be here to stay, as America, perhaps reawakened after its new Sputnik moment, re-enters a competition with an old adversary it thought it left behind so many years ago.

William Giannetti is a defense contractor, U.S. Air Force Reserve officer, and Afghanistan War veteran. The views in his article do not represent those of the U.S. Government or Air Force. Giannetti has spent twenty-three years as a civil servant, Philadelphia police officer, and a Department of Defense analyst for the joint staff.