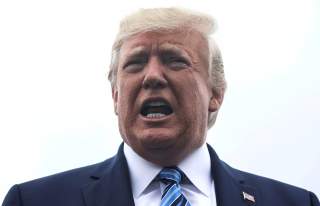 The campaign to reelect President Donald Trump embarked on a special effort Thursday to mobilize suburban women across 13 battleground states.

The campaign is acting as if it believes these women are secretly MAGA voters through and through.  It’s more likely that they’re actually panicking about how quickly their support is plummeting with a demographic they carried in 2016.

The 2018 election proved that these suburban women were leaning purple, even in Republican strongholds like Texas. They played a massive part in turning the House back over to the Democrats. As Trump fights to win them back, several of the issues that tend to resonate most with them happen to correspond with some of the biggest obstacles the Trump administration has been facing.

Trump has spent much of the summer spouting all kinds of racist comments, from his attacks on congresswomen of color known as “The Squad,” to his invective against Baltimore and Rep. Elijah Cummings (D-MD), to his recent comments about how Jews should vote for Republicans out of “loyalty” to Israel. As the AP News found last monththrough dozens of interviews, suburban women “recoil at the abrasive, divisive rhetoric.”

As one Democratic strategist told The Atlantic this month, Trump’s penchant for divisive and racist rhetoric has made it harder for white people who might have been inclined to vote for him in 2016 to do so again. “What Trump is doing now is putting skin in the game for middle-of-the-road white voters,” explained Cornell Belcher.

A survey from a Republican polling firm found this month that there are even more reasons to be concerned. An overwhelming percentage of suburban women worry that the country is headed in the wrong direction (65% to 28%). They disapprove of Trump (61% to 35%) and are heavily-tilted toward supporting a Democrat for Congress (51% to 33%).

Moreover, nearly a third of the women said that preventing gun violence should be the nation’s top priority, believing that stricter laws will help prevent gun violence. They support universal background checks (90% to 9%), a 48-hour waiting period (88% to 9%), red flag laws (84% to 12%), and an assault weapons ban (76% to 22%). Support was consistent when just looking at white women.

In the wake of two shootings earlier this month, Trump has already ruled out both an assault weapons ban and universal background checks — essentially abandoning efforts to pass what these suburban women think is one of the country’s highest priorities.

What’s notable from the poll is also how few women thought the economy was the highest priority. After gun safety, the other top concerns were health care and immigration, but only far fewer were concerned about the economy or federal spending. But curiously, the Trump campaign appears to be focusing on an economic message to try to energize these voters.

Trump campaign spokesperson Kayleigh McEnany explained to Fox News Thursday morning that none of these polls is a concern. That’s because she believes the women who support Trump “don’t talk to pollsters or the media.”

She similarly told Politico, “I’m confident there are a number of female voters out there who don’t talk to pollsters and don’t register in polls but support the president.” She did not explain how she knows what a group thinks if it never publicly says what it thinks.

Given the targeted push on this particular demographic, she may not really think their support is as robust as she claims.

This article originally appeared on ThinkProgress on August 22, 2019.