Are U.S. Bases in Asia Open to Attack by China? 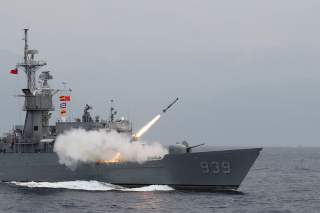 While U.S. defense strategists have been focused on China’s so-called “carrier-killer” ballistic missile, as well as Beijing’s aircraft carriers, a new report suggests China’s greatest threat to the United States may be something less eye-catching.

“The greatest military threat to U.S. vital interests in Asia may be one that has received somewhat less attention: the growing capability of China’s missile forces to threaten U.S. bases in the region,” write Thomas Shugart and Javier Gonzalez in a report released last month by the Center for a New American Security (CNAS).

Gonzalez and Shugart are both commanders in the Navy, and the latter currently serves as a military fellow at CNAS. In the report, they argue that China could use its missile forces to conduct a surprise preemptive strike against U.S. military bases in the region to prevent U.S. intervention in a conflict over Taiwan or the Senkaku Islands. “Driven partly by distinct first-mover advantages associated with the employment of modern long range precision weaponry, such a preemptive strike appears consistent with available information about China’s missile force doctrine and military strategy,” they write.

Chinese leaders began building up these capabilities after being shocked by America’s overwhelming victory over Saddam Hussein’s forces in the First Gulf War. This led Beijing to transform its Second Artillery Corps from a primarily nuclear force into one consisting of nuclear and precision conventional missiles (both ballistic and cruise). This strategy sought to capitalize on China’s asymmetric advantages such as geography and the low cost of producing missiles.

To achieve a preemptive strike against America’s military bases, China has procured a massive missile force. In fact, Beijing has the largest land-based missile arsenal in the world. According to Pentagon estimates, this includes 1,200 conventionally armed short-range ballistic missiles, two hundred to three hundred conventional medium-range ballistic missiles and an unknown number of conventional intermediate-range ballistic missiles, as well as two to three hundred ground-launched cruise missiles. Many of these are extremely accurate, which would allow them to destroy targets even without nuclear warheads. As a Rand Corporation report noted, Chinese missiles’ “circular error probabilities have decreased from hundreds of meters in the 1990s to as few as five or ten meters today.” Some of them, including the much discussed DF-21D “carrier killer” missile, have maneuverable reentry vehicles that further improve accuracy and allows them to evade missile defense systems.

Shugart and Gonzalez also point out that the People’s Liberation Army (PLA) has carried out drills simulating preemptive attacks against America’s regional military assets. In one such instance, the PLA Rocket Forces “appears to have been practicing on several ship targets of a similar size to U.S. Arleigh Burke–class destroyers moored in a mock port that is a near-mirror image of the actual inner harbor at the U.S. naval base in Yokosuka.” This is illuminating, the authors note, because the only way the Chinese military could catch three U.S. ships in port is if they conducted a complete surprise attack.

After reviewing Chinese capabilities and doctrines, the authors try to simulate such an attack to judge its effectiveness. Interestingly, while they believe China would strike U.S. bases in Japan and even some Japanese forces, they assume Beijing would avoid attacks on Korea “in order to prevent a distracting second front on the Korean Peninsula while pursuing its primary military goals elsewhere.” In their simulation, they also assume that Beijing would not initially target America’s base at Guam since it is U.S. territory and China would want to prevent an escalation that could result in America bombing mainland China.

Shugart and Gonzales run two different models of a simulated preemptive attack, keeping in mind what they know about U.S. and allied missile defense systems in the region. In both models, “enough ballistic missiles seemed likely to leak through to cause highly significant damage to U.S. bases and forces in the region.” Some of the results of the attacks include:

•  “Almost every major fixed headquarters and logistical facility struck, with key headquarters struck within the first few minutes of the conflict.”

• “Almost every U.S. ship in port in Japan struck pierside by ballistic missiles.”

• “In most cases, cratering by ballistic missiles of every runway and runway-length taxiway at all major U.S. air bases in Japan.”

• “As a result of runway cratering, headquarters destruction, and air defense degradation, more than 200 trapped U.S. aircraft destroyed on the ground in the first hours of the conflict.”

One silver lining, according to the authors, is that a more robust missile-defense system in Japan—including the deployment of Terminal High Altitude Air Defense (THAAD) and Aegis ballistic-missile-defense destroyers dedicated to protecting U.S. bases in Japan—could reduce the damage of such a surprise attack. While a significant number of missiles would still penetrate defenses in Okinawa, the damage there would be reduced. More importantly, other U.S. bases in Japan that are situated further away from China could intercept enough missiles to allow planes to get off the ground and ships out of port. The authors also advocate that U.S. regional forces practice rapid evacuation of bases on a regular basis.

This points to another important possibility. While the authors acknowledge that many Sinologists dispute China would conduct a complete surprise attack on U.S. forces, the authors point out that the United States has been surprised before—such as during Pearl Harbor. They also note that this would be consistent with China’s active-defense doctrine.

Both of these points are true. At the same time, Pearl Harbor took place at a time of tremendous tensions between the United States and Japan, and Beijing’s active-defense doctrine has also been executed during similar tense times. If Beijing were to launch preemptive attacks to support an invasion of Taiwan or the Senkaku Islands, it seems likely that there would be high tensions and some indication of troop mobilization on China’s part ahead of time. If so, there seems to be a simpler way to prevent a nightmare scenario like the one Shugart and Gonzales highlight in the report—namely, to operate with an abundance of caution in dispersing U.S. forces during periods of high tensions. This could be done by taking advantage of the rudimentary World War II air bases America is reportedly reopening in the Pacific, as well as making sure most U.S. ships are out at sea.

Either way, Shugart and Gonzales’s report does a great service in reminding defense analysts that the most exotic threats, like carrier-killer missiles, aren’t necessarily the greatest or likeliest ones. After all, America has more combat power located on its stationary bases in Asia than on an aircraft carrier. And these stationary targets are far easier to destroy.

Zachary Keck is the former managing editor of the National Interest. You can find him on Twitter: @ZacharyKeck. This piece was originally featured in July 2017 and is being republished due to reader's interest.