Are the U.S. Navy's New Aircraft Carriers Worth the Cost? OId Battleships Might Give Us a Clue. 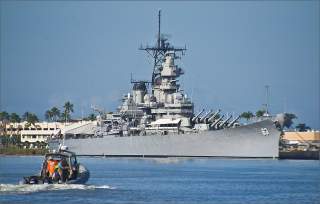 Your humble scribe just reviewed an excellent new history of the Iowa-class fast battleships, castles of steel built for an era of flux in naval warfare not unlike our own. In fact, battleship history casts doubt on the future of über-expensive behemoths like the U.S. Navy’s Ford-class nuclear-powered aircraft carriers (CVNs). The question isn’t just whether the aircraft carrier is obsolete, a floating target in the missile age. That reduces the question to technology. The question is whether the carrier is worth its cost in strategic and political terms. If flattops remain survivable enough to bear the brunt of dueling the Russian Navy or China’s People’s Liberation Army Navy for maritime command, they may remain a worthwhile investment.

Technology and tactics, then, had reduced battlewagons to subordinate status—to a fleet auxiliary bearing a hefty price tag. Much like Corbett’s cruisers or flotilla ships, they furnished naval gunfire support and performed other duties after carrier planes had rendered embattled expanses mostly harmless for surface vessels. Their capabilities were wildly excessive for such modest missions—which is why the final two Iowas, Kentucky and Illinois, were canceled along with plans for the future Montana class. Their subsidiary functions in the fleet simply weren’t worth the expense. Lesser craft would do.

James Holmes is J. C. Wylie Chair of Maritime Strategy at the Naval War College and the author of A Brief Guide to Maritime Strategy, released last December. The views voiced here are his alone.