Armenia Needs to Sue for Peace Now: The Alternative is Even Worse 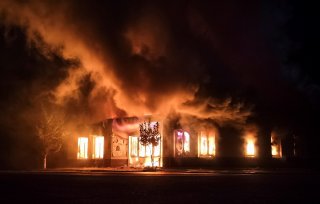 September 27, 2020 may mark the start of what Aristotle famously called the tragic unraveling or dénouement (lusis) of the war between Armenia and Azerbaijan that began way back in 1988. In the intervening decades, the one constant has been the Armenian occupation of almost all of Azerbaijan’s autonomous territory of Nagorno-Karabakh and seven surrounding regions of Azerbaijan-proper that together form about 20 percent of the country’s total territory.

There is no serious dispute that these lands are occupied illegally and that they need to be returned: four UN Security Council resolutions and various OSCE documents directly related to the conflict make this clear, as do the formal positions of all the major powers, not to mention the rest of the world. The fact that Armenia has totally cleansed the occupied lands of its pre-war ethnic-Azerbaijani population has obviously not helped its claim of victimhood, either (neither has its present campaign to indiscriminately shell civilian targets like marketplaces or key pieces of infrastructure like hydro-power plants and dams deep in Azerbaijan-proper). So irrespective of ancient grievances, a convoluted historical record, and whatever other vagarious claims have been put forward, the situation is, at the end of the day, unambiguous: the outcome to the conflict requires the end of Yerevan’s military occupation of these lands and the return of hundreds of thousands of Azerbaijani civilians to their homes.

The Armenian irredentist claim to Nagorno-Karabakh (but not the surrounding territories, which were conquered outright out of a combination of desiring to establish a security buffer and precipitating an ethnic-Armenian colonization effort) is based on false equating self-determination with the avowed rights of secession and occupation: the former falls within the scope of international law whilst the latter does not. And the reason is simple: the avowed right of secession directly infringes on the right of sovereignty and territorial integrity. Thus, by construction, self-determination is subordinate to sovereignty and its corollary, territorial integrity. There are three basic ways to counter this subordination: by treaty (when the aggrieved state signs away its legal territory), by a decision of the Security Council (essentially imposing a transfer of lands from one country to another, a highly theoretical possibility), or by force (maintenance of occupation). Armenia has known full well that the first and second is impossible given geopolitical realities and has opted since 1988 for the third. It appears that this third option has run its course.

Now, there seem to be at least two immediate causes that have resulted in the onset of the dénouement of the war. First, Yerevan’s increasingly agitated advocacy of the false equation between self-determination and secession. One saw this, first, in terms of statements coming out of Armenia in the past few years that made it clear that Yerevan was no longer interested in participating in good faith negotiations that would have as its strategic objective the end of the military occupation of the sovereign lands of Azerbaijan; second, this was matched, increasingly, in terms of actions on the ground: incremental increases in the bellicosity of ceasefire violations and provocations. The attack on September 27thperpetrated by Armenian forces that resulted in a number of Azerbaijani deaths in Azerbaijan proper was judged by Baku to have been a step too far: the strategic patience of Azerbaijan was brought to an end after decades of fruitless talks aimed at peacefully reversing a military occupation.

Obviously, Azerbaijan had been preparing for this eventuality: their counter-strike was not a spur of the moment reaction. But there’s nothing wrong with that: the country acted well within its rights under Article 51 of the UN Charter. Azerbaijan took pains to ensure the steady improvement of its military capabilities and worked diligently to lock in the strong, virtually unconditional support of Turkey that made it harder for other geopolitical actors to exert undue pressure on Azerbaijan to stick to fruitless negotiations, and so on. But again, the emphasis needs to be put on Yerevan’s evident and categorical unwillingness to bring the occupation to an end peacefully, through negotiations. This is the fundamental point.

Thus, Yerevan’s words and its resulting actions led directly to the Azerbaijani counterattack. Yerevan did not think Baku would respond decisively to what amounted to a war of attrition, in part because it overestimated the extent of its own external backing. This is obviously a failure of Armenian statecraft, and frankly, the leadership in Yerevan had it coming. There was a flare up in July and during this intense period Armenia was very publicly told by Russia and others that it could not invoke the protections under CSTO; instead of understanding this to mean that it could not rely on the unconditional support of its main treaty ally and return in earnest to the negotiating table, Yerevan threatened to attack the network of oil and gas pipelines that run from Azerbaijan through Georgia into Turkey and from there into EU territory (Bulgaria, Greece, and Italy). This was understandably interpreted by Azerbaijan—but also by Turkey and all the other strategic energy partners—as representing a clear and present danger to respective core national interests and nascent regional energy security arrangements designed to ensure a diversification of supply from Russia.

But this is far from the whole story: it is not enough to point the finger at Armenia. The mediators—the co-chairs of the Minsk Group (Russia, France, the United States)—are also at fault: there was a formal negotiation process that was launched in 1992, which had essentially produced no concrete results on the ground, in the sense that the occupation of Nagorno-Karabakh and the seven surrounding regions has not come to an end, Azerbaijani refugees and IDPs have been prevented from exercising their right of return, and so on. In other words, for nearly three decades the Minsk Group led negotiations whose objectives were clearly and unambiguously set down on paper. The Co-chairs gave themselves the responsibility to lead a defined process to achieve a defined result, and yet the conflict has remained frozen since a 1994 ceasefire was put into effect: none of the Minsk Group’s defined objectives have been achieved—not even close. Thus, their actions or inactions—whether by design or not—resulted in the perpetuation of a status quo that was the opposite of the agreed objectives. So this is why it is not enough to just point the finger at Yerevan.

And so we come to the start of the dénouement of the war. Objectively, the solution to the conflict is predicated upon the return of occupied lands by Armenia to Azerbaijan: that’s what the various documents indicate. This result can be achieved through diplomacy—through negotiations—or through war. The former is preferable to the latter, of course. And this is the option that has been pursued by Azerbaijan in good faith for decades. The problem is that this good faith was not only not reciprocated by Armenia, but it was instrumentalized and abused—most recently in the past few years. Yerevan simply believed that it could stall indefinitely, all the while entrenching it occupation. All appearances that a breakthrough was approaching turned out to be illusory or duplicitous. And instead of letting sleeping dogs lie, as it were, Armenia continued to provoke and violate the ceasefire (of course, Azerbaijan did so too). Example: less than two years ago Armenia’s defense minister even went so far as to call on the country to prepare for the pursuit of a “new war for new territories.”

So the aggressor kept pushing the aggrieved party and the mediators did nothing in response. And Azerbaijan judged the situation to no longer be tenable. Frankly, at this point, Armenia has no leg to stand on—no just cause to complain.

Now, it appears that the war will produce gains by Azerbaijan and losses by Armenia. The question is whether this will happen primarily on the field of battle or the negotiating table. If it happens primarily in battle, Armenia will almost certainly lose more in every sense.

That being said, I do not think the leadership of Azerbaijan wants to utterly defeat Armenia in combat; rather, Baku would prefer to have its gains in war result in a resumption of negotiations on the terms of Armenia’s military withdrawal from Nagorno-Karabakh and the seven surrounding regions. And I think Azerbaijan will be very generous in the terms it proposes—certainly more generous than if Armenia continues to refuse to negotiate its military withdrawal.

If the liberation of Azerbaijan’s lands currently under occupation is accomplished exclusively or primarily through the force of arms, then Armenia will have no way of extracting concessions. It is difficult to see why this is in the strategic interest of Yerevan or the Armenians of Nagorno-Karabakh and the other occupied lands—whether the civilians have lived there for generations or are part of the new settler population.

But what if Azerbaijan loses the war? That seems quite unlikely, given present circumstances. I have no evidence for this but I think Turkey has made it clear in private that it will not allow such a scenario to unfold if push comes to shove—if, for instance, Azerbaijan experiences significant military setbacks or the pipelines supplying oil and gas to Turkey and the EU are bombed. Some may not like this, but it is what it is. This Turkish support is the key to understanding the strategic timing of Azerbaijan’s counter-attack. Turkey shares a long border with Armenia, and the Turkish military is formidable—and Azerbaijan has bolstered its military capability in its Nakhchivan exclave, which is territorially contiguous to Turkey. There is no chance that Armenia can sustain a two-front war.

So Yerevan has overplayed its hand—strong military support, whether from Moscow, Tehran, or elsewhere, is not in the cards for Armenia. The most prudent course of action, at this point, is for Yerevan to cut its military losses and return to the negotiating table. Although some in Azerbaijan likely favor a comprehensive military solution, I think Baku would prefer, all things being equal, to complete the liberation of the occupied lands in an orderly fashion at the negotiating table.