Armored Warrior: This is How the Israeli Army Will Use Its Deadly Tanks to Fight 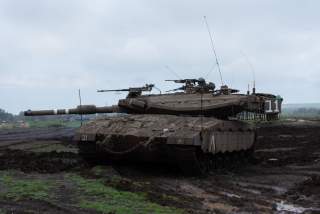 Stand atop Tel Saki on the Golan, and you can understand Israel’s strategic dilemma in a single sweeping glance.

In front of the hill, just a couple of miles away across a grassy strip studded with signs warning of minefields, stretches the border fence between Israel and Syria. Behind and to the left, just a few minutes away by tank, are the houses of an Israeli town.

And etched into the reddish dirt of Tel Saki itself are concrete-lined trenches. On October 6, 1973, 1,400 Syrian tanks surged across the border, an iron tide that flowed around the sixty Israeli soldiers surrounded on Tel Saki. Low on ammunition and with most of their number wounded, the Israelis held the hill until rescued.

“This is not 1973,” he said as he stood on Tel Saki and pointed toward the Syrian border. “The enemy today can be two guys with an anti-tank missile.”

The National Interest spoke with Israeli commanders during exercises last month by the 188th Barak (“Lightning”) Armored Brigade on the Golan Heights, which Israel captured from Syria after the 1967 Six-Day War. This particular exercise illustrated the wide spectrum of threats the Israel Defense Forces (IDF) must prepare for: the maneuvers included conventional mechanized operations, counter-guerrilla tactics against an irregular army like Hezbollah, and destroying tunnels.

The IDF would love nothing better than to fight an old-fashioned tank battle, at which it is famously proficient. But twenty-first-century warfare is more about guerrillas and tunnels, and these are the bane of high-tech, mechanized armies. The U.S. military has struggled with subterranean warfare from Iwo Jima to Vietnam, where the famous “Tunnel Rats” had the thankless task of crawling underground to dig out the Viet Cong. The IDF has had to cope with Hamas infiltration tunnels dug from Gaza into southern Israel. Last year, the Israelis discovered several Hezbollah tunnels between southern Lebanon and northern Israel, stoking fears of a surprise Hezbollah attack to seize the Galilee.

The problem is that tanks can’t get inside a tunnel, but a Hezbollah fighter with an anti-tank missile can pop out of one and destroy a $5 million Merkava tank. Haunting the Israeli Armored Corps is the debacle of the 2006 Israel-Lebanon War, when Hezbollah used a sprawling network of tunnels in southern Lebanon to ambush and knock out numerous Israeli armored vehicles.

The Israeli armor commanders that TNI spoke with seemed grimly determined to avoid a repeat of 2006.  “We understood there was a need for change,” Schneider said.

Standing near a firing range, with three wedge-shaped Merkava III tanks maneuvering in the background, Major Dori Saar, operations officer for the 188th Armored Brigade, described how Israel will use tanks to defeat tunnels. “The tanks will provide fire support for the infantry and engineers,” he explained.

It’s a tactic that takes advantage of two strengths that modern tanks enjoy: long-range firepower and advanced sensors. Standing off at a safe distance from anti-tank ambushes, tanks can spot enemy troops and provide covering fire while the foot soldiers go in to destroy the tunnels. Tunnel-busting will be a combined-arms operation down to the company level, with two platoons of tanks working with a platoon of infantry and engineers apiece.

For an army with a legendary reputation for bold, fast-paced armored operations, this approach seems a throwback to World War I: the job of the first tanks was not to be the star of the show, but only to help the infantry overcome machine guns and barbed wire to reach their objective.  However, until there is a way for a twelve-foot-wide tank to fit inside a seven-foot-wide tunnel, these tactics at least make armor relevant for subterranean warfare.

If tunnels were the only threat faced by Israel, that would be challenging enough. But the IDF also has to prepare for a conflict with Hezbollah, a formidable practitioner of “hybrid warfare” that combines the well-trained soldiers and advanced weapons of a conventional army with the flexibility and elusiveness of guerrillas. Battling Hezbollah could encompass everything from stopping a surprise Hezbollah attack to seize Israeli towns, to crossing into well-fortified southern Lebanon to destroy Hezbollah rocket attacks.

An advance into Lebanon will not be the timid, clumsy offensive of 2006. Saar says that his brigade will maneuver “fast and deep,” operating across a battlespace 30 to 40 kilometers (17 to 25 miles) in depth. This will be a small-unit war, waged by platoons and companies instead of brigades and divisions. The sort of combat that puts a premium on quick-thinking junior officers, flexible tactics, and well-trained soldiers.

The threat of advanced anti-tank weapons, such as the deadly laser-guided Russian Kornet employed by Hezbollah in 2006, had led some critics to question whether tanks are still useful. Combat in the rough terrain that guerrillas will operate from, such as hills or the numerous villages that dot Lebanon and Syria, is challenging for armored vehicles. Yet Schneider argues that tanks are still vital: they have firepower and armor protection that a foot soldier can’t carry on his back, and the mobility to bring that firepower to where it is needed.

New technology is also making tanks less vulnerable. Active protection systems mounted on vehicles, such as Israel’s Trophy (which is being adopted by the U.S. Army), can shoot down incoming anti-tank rockets.

“But they can’t replace the skill of the tank crew,” Schneider warns.

And there yet still more challenges the IDF must train for. Missiles from Iran or rockets from Gaza and Lebanon. Conventional ground warfare against neighboring countries that are hostile or that could suddenly turn hostile (even Hezbollah now has American M-1 tanks captured in Iraq). Occupation duty in the West Bank (which critics believe saps Israeli military resources from threats like Iran). And the worst part is that the Israelis can never be sure which threat will emerge next. This array of threats would tax even a superpower, let alone a nation of fewer than nine million people.

Saar, who had trained with the U.S. Army at Fort Benning, joked about the differences between the U.S. and Israeli armies. The Americans are great when it comes to the planning and logistics of operations. “But the Americans get 96 hours to prepare. With us, just getting eight hours would be great.”