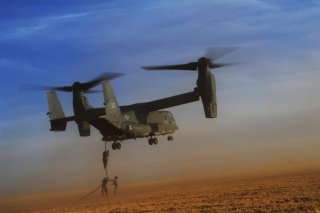 Bell, one of two companies behind the V-280 Valor prototype tiltrotor, announced a partnership with Rolls Royce, selecting a new engine that the company builds for their vehicle. The new engine is a variant of that used by the V-22 Osprey, a tiltrotor in service with the United States also made by Bell.

Rolls Royce’s engine offers several benefits to the Valor program, including an additional 2,000-horsepower per engine. In addition, it is an off-the-shelf variant of the engine installed on the V-22 Osprey tiltrotor rather than a from-scratch design. It is already a tested and proven power system and offers a degree of logistical support simplicity that other engines wouldn’t be able to offer.

Like the V-22 Osprey, the V-280 takes off vertically like a helicopter but flies horizontally like a fixed-wing airplane, combing a hover and maneuverability capability with high top speed and increased range. Unlike the V-22, however, the V-280’s engines are mated to the airframe’s wingtips. As a result, they do not rotate when transitioning between flight types, allowing soldiers to enter and exit via sliding doors on either side of the airframe rather than via a rear ramp.

A video of the V-280 in flight can be seen here and demonstrates how the aircraft transitions between the two flight types.

The Army’s Future Long-Range Assault Aircraft program seeks a replacement for the service’s aging utility helicopters. An Army publication explains that “FLRAA will provide the Joint Force with an aircraft that possesses increased speed, range, survivability, and maneuverability to allow the Army to retain overmatch against enemy forces in ever-changing environments.”

Bell’s V-280 Valor is facing the SB-1 Defiant, a joint Lockheed-Sikorsky venture. Their prototype differs significantly from the V-280. Rather than relying on dual tiltrotors, the Defiant is a compound helicopter, flying with oppositely spinning dual rotors and a smaller pusher propeller at the vehicle’s rear.

Reequipping the V-280 Valor with a tried and true engine design already in service with the United States military makes Bell’s vehicle an attractive offering. It could be the difference between winning and losing the Army’s Future Long-Range Assault Aircraft competition.