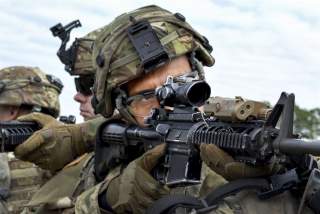 Earlier this month, the U.S. Army announced that Austin, Texas, will be the location for its new Futures Command headquarters. The command, intended to be the spearhead of the Army’s modernization effort, will direct the research and development (R&D) of new military technologies and build partnerships with civilian innovators in academia and industry.

Futures Command is poised for success. It has clear objectives, the authority of a four-star Army command, and an innovation-rich environment to work with in Austin. Rarely does a team, in any field or at any level, find itself in such a favorable position and with the power to see its projects through to execution.

Despite these conditions, Futures Command has a daunting mission ahead of it, one that is not clear it will be able to achieve. The command is charged with nothing less than overhauling and modernizing the United States Army, one of the most cumbersome and bureaucratic organizations in the world.

Beyond that, America’s global competitors haven’t been sitting on their hands. China has modernized its force at an alarming rate, pouring billions into defense R&D and aggressively pursuing global leadership in technologies like artificial intelligence. In the past few years, Russia has charged ahead in advancing its missile technologies and has become an enthusiastic employer of autonomous weaponry. Staying ahead of these challengers, much less keeping pace with them, should not be taken for granted.

The immediate tests for Futures Command don’t lie overseas, however, but at home. Looming over the command is the Army’s recent legacy of massively expensive failures in other modernization efforts, most notably the 2009 cancellation of the Future Combat System (FCS) program. Investigations found that the program cost American taxpayers more than $20 billion and produced virtually nothing for the Army. That failure, among others, has shadowed the Army ever since and prompted experts to be skeptical that the new Futures Command will be anything different.

These concerns are valid and America should demand that Army leadership doesn’t repeat the failures of its predecessors. So far, the problems that plagued the FCS program (dilution of leadership across many programs, preference given to legacy defense contractors, shady political influences) seem to have been largely stripped away from Futures Command. If it holds itself to the clean, outward-looking standards set by Army Secretary Mark T. Esper and Army Chief of Staff Gen. Mark A. Milley, Futures Command may well become the forward-thinking guide the Army so desperately needs.

However, no matter how diligently Futures Command works to put the failures of its predecessors behind it, the command will continue to be hamstrung by defense budget instability until Congress mends its fiscal malpractice. That responsibility rests squarely on the shoulders of America’s elected leaders.

Congress hasn’t passed a final defense appropriations bill on time since 2009. Ever since, the Department of Defense (DoD) has begun each fiscal year without knowing how much money it could spend that year. Susanna Blume and Lauren Fish report that, “Congress’s inability to pass budgets, let alone on time, has severely handicapped the department in fulfilling its mission—to ensure the safety of the nation and protect U.S. citizens and interests at home and abroad.”

Specifically, the past decade of budget instability has discouraged the very thing that the military needs more than ever: innovation. With no guarantee of program funding from year to year, the Army chooses to invest its cash back into legacy systems like the “Big Five” from the 1980s (Abrams, Bradley, Apache, Black Hawk and Patriot) instead of R&D for modern systems. This cycle kas kept the service on “warm idle” and dangerously behind the pace set by its competitors.

Going forward, Congressional leaders need look no further than the new home of Futures Command to see the value of Pentagon innovation well-funded. Since 2016, the DoD has invested strategically in Austin-based companies through its Defense Innovation Unit Experimental (DIUx). Contracts issued through DIUx have benefited the DoD with AI programs that economize Air Force budgeting, software that saves the military 350,000 pounds of fuel per week, and systems that flag damaged Army vehicle parts before they break down. Futures Command intends to pursue similar partnerships with Austin-based organizations.

To its credit, Congress is taking steps to amend its deficiencies. On July 26, the House of Representatives approved the second version of its 2019 National Defense Authorization Act (NDAA), keeping the bill on track to be passed and implemented before the beginning of the fiscal year. In the bill, Congress pledges to meet and exceed the Pentagon’s 2019 budget request, authorizing increases in key areas like microelectronics research, hypersonic weapons, artificial intelligence and quantum computing. Additionally, leaders from the House Armed Services Committee (HASC) have introduced a resolution recognizing that “failure to provide our military with full, stable, and on-time funding . . . severely harms our military’s ability to prepare for and defend against (enemy) capabilities.”

Although commendable, these actions are just a start. Until Congress straightens its never-ending fiscal rollercoaster and Army leadership demonstrates that it has learned from its past modernization failures, the success of Futures Command remains dubious. In the meantime, America’s challengers continue to march forward.

Cole Stevens is a researcher at the Center for a New American Security (CNAS) where he examines the effects of emerging technologies on military modernization. He has worked for Austin-based microelectronics developers Silicon Laboratories and Applied Materials, Inc.