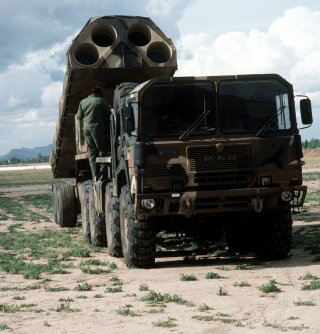 Some new details were revealed this week about the Army’s Mid-Range Capability (MRC) plans, which were discussed at the Association of the U.S. Army (AUSA) conference by the Army's Rapid Capabilities and Critical Technologies Office (RCCTO).

The War Zone reported that the Army has released a graphic showing components of its first "Mid-Range Capability" battery, which will employ ground-launched SM-6 and Tomahawk missiles.

According to the site’s description of the graphic, “the unit will have four trailer-mounted, multipurpose launchers that are similar, if not identical, to one the Pentagon used to conduct a test of a land-based Tomahawk two years ago.”

In addition, the full MRC weapons system will be called “Typhon,” the site reported.

The Pentagon tweeted a video of what it would look like.

“See the game-changing, cross-domain, cross-service concepts the Strategic Capabilities Office and [U.S. Navy]  are rapidly developing: an SM-6 launched from a modular launcher off of USV Ranger. Such innovation drives the future of joint capabilities,” the tweet said.

Meanwhile, the full MRC system is set to field its first prototype in 2023. That’s according to Breaking Defense, also reporting from that conference.

“We’re able to deliver on this aggressive, accelerated schedule because we are leveraging existing hardware, software, and institutional training for these proven capable missiles, for SM-6 and Tomahawk,” Marcia Holmes, of the Rapid Capabilities and Critical Technologies Office, said at the conference, per the site. “And by maintaining commonality with the Navy, we are able to capitalize on modernization efforts, on investment strategies, across a multi-service Mid-Range Capability programs to include joint test events … the Navy and the Marine Corps.”

The site described this progress as “yet another leap for the Army’s long-range strike plans, which are critical to the service’s role in countering China across all domains — land, sea, air, space and cyberspace.”

Breaking Defense also reported on remarks at the event by Secretary of the Army Christine Wormuth, on how the Army plans to explore “fundamental questions.”

“We’re also going to be looking at things like the performance of the new programs that we have in development,” Wormuth said at a press conference at the conference. “Are they staying on schedule? Are they coming in at a cost that we expect them to be at?”

“It’s fair to say we are looking at everything, but it is essential that we transform for the future, and the modernization program that we’ve embarked on is a critical piece of that transformation… That set of modernization priorities is incredibly important, so we will certainly be looking to protect that, because it’s so core to what we’re doing.”