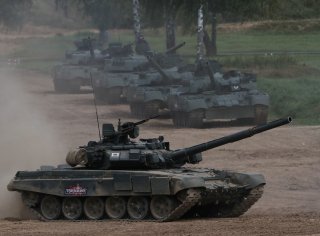 ARMY 2020 was held from August 23 to August 29 at the Patriot Exhibition Center in Kubinka Air Base, located in the broader Moscow region. This year’s event has been expanded to include missile defense demonstrations and exercises at Ashuluk firing range near the Russian city of Astrakhan. Despite the newfound difficulty of coordinating large-scale events in the post-pandemic world, ARMY 2020 has not been noticeably scaled down from its previous iterations. Over 1,316 exhibitors and just under 12,000 total participants reportedly attended the event, suggesting roughly the same engagement as last year’s ARMY 2019.

There were some new guidelines, however. Participants were asked to wear masks and maintain adequate social distancing; quick-response codes were required for admission, and everyone had to pass an onsite temperature test before being allowed to enter the event premises. Exhibitors were additionally required to wear and regularly change gloves, and to frequently disinfect any military hardware that may be touched by visitors.

In keeping with established tradition, the event was attended by delegations from a who’s who list of Russian defense customers and military partners; among the fifteen participants were China, Belarus, Kazakhstan, India, Greece, Pakistan, Belarus, and Sri Lanka. Western Military District Deputy Commander for Logistics Lieutenant-General Andrei Bulyga told Russian media that 730 individual pieces of military hardware were shown at the event.

A procession of new and recent Russian hardware was displayed over the six days spanning ARMY 2020. Vityaz-D, an autonomous underwater that specializes in deep-sea reconnaissance and navigation, made its exhibit appearance after first being spotted earlier this summer. The Hermes long-range guided missile system, which a Rostec official described as occupying the “niche between precision munitions and artillery missile systems,” was displayed at the event and will be making its way to Russia’s armed forces in the near future. Kalashnikov Concern unveiled its new MP-155 ULTIMA “Smart Shotgun,” an iteration of the popular MP-155 hunting shotgun that boasts an integrated computer/display combo. The ULTIMA offers a wifi connection, built-in USB-C port, and camera to record and stream video footage, as well as a compass, timer, and digital ammunition counter. A more recent addition to the tried-and-tested ARMY formula was the inclusion of a large historical exhibit, commemorating the seventy-fifth anniversary of the Allied victory in WWII with a static display of wartime tanks and artillery pieces that included the Soviet T-34, British Matilda Infantry Tank, and US M3 Stuart.

The ARMY expo has long served as a prime platform for demonstrating Russian hard power and asserting the Kremlin’s warm ties with defense partners, but there is another purpose: greasing the wheels of ongoing arms contract talks. Forty-one contracts were signed during ARMY 2020, totaling an impressive 1.16 trillion rubles or roughly $15 billion. By far the biggest customer was the Russian Defense Ministry, signing a cascade of large deals with Russian defense companies including the United Aircraft Corporation (UAC) and Star Shipbuilding Center for Su-35S/Su-34/Su-30SM2 fighters and Kilo/Lada submarines respectively.

ARMY 2020 was the first large-scale international exhibition to be held in Russia since the onset of the Coronavirus pandemic earlier this year. The expo will be followed in September by ‘Kavkaz 2020’, a series of joint military drills conducted in South Russia and parts of the Caucasus by the Russian army and several of its regional partners.