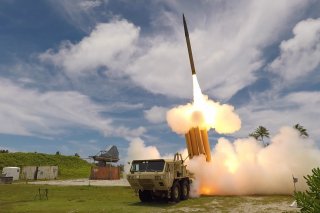 The Army is on the cusp of deploying an air-defense system that can track multiple incoming enemy attacks from air, sea or land and instantly network across a multi-node meshed system of warfare nodes to communicate the details of a threat.

This system is called the Integrated Battle Command System (IBCS). It is an ambitious Army initiative that has been underway for many years. The information-sharing platform connects previously dispersed nodes. It uses a common networking protocol that ensures something like the ground-based radar of a Patriot missile system can exchange threat data with a AN/MPQ-64 Sentinel radar across wide swaths of terrain. For example, perhaps that ground-based radar detects an incoming cruise missile and transmits the details of its flight path trajectory to a ground-based interceptor in position to intercept the attack.

The Army plans for IBCS to be operational by 2023. It is pursuing a “kill chain architecture study” to assess the technical parameters fundamental to cross-domain information sharing and target coordination to make sure the weapon is properly prepared for anticipated but yet-to-emerge future threats.

“We are buttoning up the base capability of IBCS and while we make a tandem effort to look at the kill chain architecture study,” Maj. Gen. Brian Gibson, the director of the Air and Missile Defense Cross-Functional Team for Army Futures Command, said. This involves the fundamentals of achieving integrating things that were never previously integrated.”

Gibson described IBCS as an important piece for the joint force “end state.” The network is engineered to be sensor agnostic, which means it can use interfaces and gateways to integrate with otherwise disconnected platforms, according to Gibson. This concept, often described in terms of a need to build an “open architecture,” is the basis of a “kill-chain,” which seeks to expand combat attack and defensive survivability by forming a meshed system of combat nodes. Military weapons such as fighter jets, bomber aircraft, drones, ships and tanks are no longer thought of merely as combat systems but also information nodes across a vast, multi-domain warfare network.

With this operational concept at the forefront, the Army often refers to its IBCS program as a key contribution to the Defense Department’s Joint All Domain Command and Control program, which seeks to connect ground, air, sea, space and cyber domains to one another as part of a joint warfare system. The goal is to truncate “sensor-to-shooter” time and get ahead of an enemy’s decision cycle to prevail in fast-moving combat. Putting air assets such as drones or fighter jets in position to relay information collected by sensors and targeting to surface Navy ships and ground combat vehicles on the move is now a possibility. This tactical approach has led the Defense Department to rethink its traditional concepts of joint warfare.