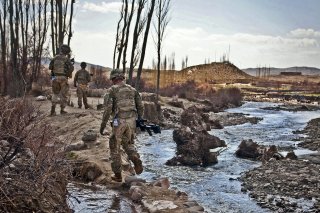 The U.S. Army announced in 2018 that it would return to the iconic "Greens" uniforms that were worn during the Second World War. The olive drab uniform practically defined the Army for much of the twentieth century.

The Army announced the release of its first Climate Strategy this week. The Climate Strategy will guide decisions in response to threats from climate that affect installation and unit sustainability, readiness, and resilience. The strategy will also direct how the Army will maintain its strategic advantage through deliberate efforts to reduce future climate impacts and risks to readiness and national security.

The Army's plan is essentially a response to President Joe Biden's executive orders calling on government agencies and departments to adapt to climate change. It also directed the Army to slash its emissions in half from 2005 levels by 2030 and reach net-zero emissions by 2050.

"These are essential steps, not simply to meet a requirement, but to defend the nation under all conditions," wrote Secretary of Defense Lloyd J. Austin III, in the plan's foreword.

The Threat of Climate Change

Experts have warned that climate change increases the likelihood of worldwide drought and insecurity, which places demands on fragile states and contributes to food scarcity, migration, and security concerns. These trends threaten U.S. national security interests and defense objectives. As a guide for future decisions, this strategy is the next step in the Army's decades-long effort to combat climate change in support of national security interests.

The Army had developed its Climate Strategy as a roadmap of actions that will enhance unit and installation readiness and resilience in the face of climate-related threats. Changing climate conditions will also require the Army to meet new operational challenges, expand disaster response missions, and address risks to our people and lands.

Army-wide efforts will include enhancing resilience and sustainability on its installations, reducing sustainment demand, and preparing a climate-ready force with the appropriate knowledge, skills, concepts, and plans necessary to operate in a climate-altered world.

This strategy will position Army installations and supply chains to better withstand extreme weather and improve its training relevancy to a changing world while warfighters fulfill their missions under the harshest conditions.

As part of the strategy, the Army will move forward with plans to install a microgrid at all of its installations by 2035. In addition, the service has announced that it will strive to have a fully electric non-tactical vehicle fleet by 2035, while it will work to cut emissions from buildings and include climate change threat mitigation into its land management decisions, CNBC.com reported.

The U.S. Army has started or completed nearly one thousand renewable energy projects to date. Those include a 2.1 megawatt solar field at Fort Knox in Kentucky, while twenty-five microgrid projects have been scoped and planned through 2024, according to the Army's strategy plan.

"The time to address climate change is now. The effects of climate change have taken a toll on supply chains, damaged our infrastructure, and increased risks to Army Soldiers and families due to natural disasters and extreme weather," said Secretary of the Army, Christine Wormuth.

“The Army must adapt across our entire enterprise and purposefully pursue greenhouse gas mitigation strategies to reduce climate risks," added Wormuth. "If we do not take action now, across our installations, acquisition and logistics, and training, our options to mitigate these risks will become more constrained with each passing year."