The Army Is Bringing Back This Old School Bazooka 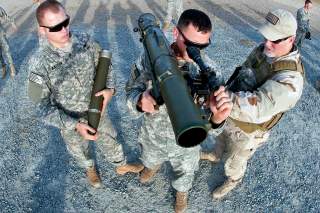 While the Carl Gustaf’s been a favorite of special operations forces for decades, the M3E1 may prove especially useful to regular soldiers downrange.

The Army is planning on spending major cash to bolster its arsenal of 84mm Carl Gustaf recoilless rifles in the coming years, nearly quadrupling requested funds to acquire hundreds of the upgraded M3E1s to deliver on its pledge to return the iconic bazooka to the front lines.

The service’s fiscal 2019 budget request contains a $23.3 million line item to equip the Army and Army National Guard with 300 M3A1 recoilless rifle systems, fire control mechanisms, and sub-caliber adapters and spares. That’s a significant increase over the measly $6.5 million earmarked for the MAAWS in the branch’s fiscal 2018 budget request (and the zilch sought in previous years).

Although 300 launchers may seem paltry, next to the 1,111 M3E1 recoilless rifles that PEO Soldier approved for rapid procurement in September 2017, the new contracts with Swedish Carl Gustaf godfather Saab Dynamics AB would constitute nearly a third of the MAAWS program’s lifetime budget.

More importantly, the Army’s budget request also comes with an explicit approved acquisition objective (AAO) of 2,460 total boomsticks through fiscal 2023. The Army wasn’t kidding when the service first announced in 2016 that it was delighted to invest in some saucy bazooka action.

But why, you may ask? All kinds of reasons, according to the Army’s allowance request: “engaging, neutralizing and destroying lightly armored vehicles, soft-skinned vehicles, personnel in the open or defilade, and field fortifications in both open urban and rural operational environments … marking threat targets with smoke for supporting weapons, obscuring threat weapons and illuminating threat targets.”

The branch has increasingly pivoted to two theaters that seem deliciously well suited for the M3E1: Eastern Europe, where service members are increasingly fielding the Gustaf (and the low-cost AT-4 anti-tank system the M3E1 is partially designed to replace) to deter Russian aggression; and the Global War on Terror in Afghanistan, where the Carl Gustaf has been trained on militants sporadically since at least 2012.

While the Carl Gustaf’s been a favorite of special operations forces for decades, the M3E1 may prove especially useful to regular soldiers downrange. The system’s new titanium shell reduces the system’s weight by 6 pounds and its length by 2.5 inches, and it offers soldiers the capability to fire off multiple salvos of different specialized ammunition, a stark departure from the one-and-done AT-4 system.

When and where soldiers will be able to get their hands on the new Carl Gustaf remains to be seen, especially since the Saab contracts wouldn’t technically be awarded until April and December 2018, according to the Army’s budget request. But one thing is certain: The proposed purchase clearly indicates the service plans on making good on its promise of a Carl Gustaf for every infantry platoon.