Army Developing Drones That Can be Deployed From a Grenade Launcher 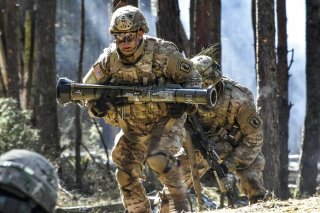 Weaponized drones aren't new—and last fall the U.S. Army announced that it was working on an experimental drone armed with a multi-shot, 40mm grenade launcher that could be employed to destroy enemy targets hiding behind cover. Now scientists at the Army Research Laboratory (ARL), part of the Combat Capabilities Development Command at the Aberdeen Proving Ground in Maryland, have developed a camera drone capable of being fired from the M320A1 40mm grenade launcher.

Once fired, soldiers could control the Grenade Launched Unmanned Aerial System (GLUAS) with a handheld device that would be similar in design to a traditional consumer drone controller, and receive a video feed from the drone's onboard camera system.

"In battle, there are multiple scenarios of when soldiers would use this technology," said John Gerdes, a mechanical engineer at ARL, in a press release. "Basically, if there is something you want to look at, but you have no idea where it is yet, that's where the drone comes in."

Soldiers who come under attack could launch the GLUAS, which would provide a bird's eye view of the battlefield.

"This device provides an autonomy and intelligence platform to help soldiers perform useful missions while having a lookout from hundreds of feet in the air," added Gerdes.

The Army is reportedly working on two variants of the GLUAS—one is a small, paragliding system with folding blade propellers and Mylar paragliding wing to help it stay airborne; while the other utilizes a traditional helicopter-style layout that is similar to many small commercial and consumer drones. Each can be launched in a small projectile that is the size of the 40mm grenades.

"[GLUAS] is aligned with Army modernization priorities," said Hao Kang, another mechanical engineer with ARL. "We're trying to provide capabilities to individual Soldiers. The most exciting part of this is the viability of this platform, coupled with its gun-launched deployment capabilities."

The German-developed M320A1 grenade launcher, produced by Heckler & Koch, only has a 350-meter maximum effective range. However, the GLUAS has a range of 2 kilometers and an operating ceiling of 2,000 feet in the air. With a projected battery life of 90 minutes it could provide some added situational awareness to those soldiers with boots on the ground. It could be used to help search for snipers and locate the positions of the enemy on the battlefield, or simply find lost troopers, and provide that eye in the sky to the smallest organized units in the Army.

"We're here to develop innovative concepts for the warfighter's needs, which generally means we bring the size and weight down of a device, and push up the range and lethality," Gerdes said.

The Army has shown a continued interest in drones, and last summer, an 82nd Airborne Division unit deployed to Afghanistan with tiny, helicopter-like drones that have been dubbed Black Hornets.