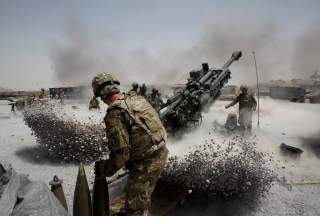 Key point: This is all part of the Pentagon’s plan to phase out cluster munitions.

The U.S. Army is cooking up new warheads for its 227-millimeter artillery rockets to replace versions filled with cluster bombs. An official video shows the deadly effects of these so-called “alternative warheads” on simulated vehicles, command centers and people.

For more than two years, the ground combat branch has been working on the improved design. Instead of more than 400 small bomblets in older models, the upgraded weapons will shoot out a hail of shrapnel.

In March 2015, U.S. Army Col. Gary Stephens, the project manager overseeing the program, presented the film at the National Defense Industry Association’s Precision Strike Annual Review in Springfield, Virginia. The collection of clips depicts test launches, rockets hitting various targets and even an experiment to see if the rounds would survive fires or an accidental 40-foot fall.

It’s all part of the Pentagon’s plan to phase out cluster munitions. By 2019, all the services must ditch any weapon that leaves more than one percent of its payload scattered around the battlefield, Stephens pointed out in the briefing.

The Army uses M-85 cluster submunitions in its M-30 rocket, but these munitions are not always reliable. When there’s a dud–and there’s always duds–American soldiers can end up leaving unexploded ordnance behind well after the fighting stops. The new, specially designed fragments are deadly to anyone near them when the shell explodes, but do not pose the same long-term hazard.

Further, these shrapnel warheads fit onto existing rocket motors and work with the GPS guidance kits the Army already uses. The M-270 tracked launcher and smaller M-142 truck-mounted version — also used by the U.S. Marine Corps — can both shoot the new rockets.

The ground combat branch hopes full production will start by the end of Fiscal Year 2016. The program is also “delivering capability ahead of schedule and under cost,” according to Stephens’ briefing. With any luck, Army artillerymen will start getting the new rounds soon.