The Army Is Getting Serious About a New Scout Helicopter 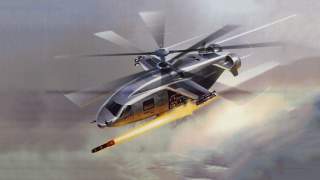 The U.S. Army on April 23, 2019 awarded contracts to five companies to develop prototypes for the ground-combat branch’s new scout helicopter.

The FARA rotorcraft also will free up hundreds of Boeing AH-64 Apache attack helicopters that the Army has pressed into the scout role despite the Apache being too big, slow and heavy for the role.

To adequately replace both the OH-58D and the AH-64, the new copter will need to carry sophisticated sensors and a heavy load of long-range weapons. It will need to be able to fly for hours at a time at speeds fast enough to evade enemy defenses, all in hot-and-high conditions that can sap a rotorcraft's lifting power.

It also will need to be tough, reliable and affordable.

The Army in 2018 announced a plan for a fly-off between FARA candidates. The branch wants the new copter to enter service no later than 2028. By military standards, that’s soon. And the five builders are in different states of readiness for the imminent fly-off.

Texas-based AVX plans to offer a version of its Joint Multi-Role helicopter, a stubby rotorcraft with ducted fans in place of the tail boom. “The AVX design offers the capabilities the Army wants for the future fleet of utility and attack aircraft at a very attractive price,” AVX stated.

“The AVX JMR aircraft has entry doors on both sides of the fuselage as well as a large rear ramp for easy cargo handling. Additionally it has retractable landing gear and the attack variant … carries all armaments stored inside until needed which provides a ‘clean’ aerodynamic design.”

Bell, also headquartered in Texas, reportedly will offer a conventional rotorcraft based on its Bell 525 utility copter.

“Bell’s case? They say they can meet the ... 235 miles-per-hour speed requirement for the scout without resorting to more complex technologies that cost more to build and maintain,” Breaking Defense explained. “That’s potentially very appealing to the Army, which has included maximum costs for initial purchase — no more than $30 million per aircraft — and per flying hour as requirements alongside aerodynamic performance.”

Chicago-based Boeing is being cagey. “The company declines to reveal details of its proposal, citing competitive considerations,” Flight Global reported. “It manufactures the AH-64 Apache attack helicopter and AH-6 Little Bird light gunship – two helicopters that could be partially, if not entirely, replaced by FARA.”

Karem in California likewise has volunteered few details. “The design firm has put forward a series of tiltrotor concepts of different sizes for the Future Vertical Lift program,” according to Flight Global. FARA falls under the wider FVL effort.

By contrast, Lockheed via its Sikorsky subsidiary loudly has extolled the virtues of its high-tech S-97 Raider, a speedy “pusher” helicopter with a backward-facing tail rotor and counter-rotating main rotors that the company lumps together under its so-called “X2” technology.

Whichever company the Army taps to build potentially hundreds of scout helicopters must contend with a demoralizing legacy.

For more than 20 years the service tried and failed to replace the OH-58, which first flew in its austere OH-58A version in 1966. The D-model Kiowa Warrior in the late 1980s added new sensors and weapons to the basic OH-58 airframe.

In its first attempt to replace the OH-58D, the Army in the 1990s paid Boeing and Sikorsky to develop the RAH-66 Comanche, a very expensive "stealth" helicopter that, in reality, probably wouldn't have been very stealthy. The Army in 2004 finally canceled the Comanche.

Next, the service commissioned Bell to develop the ARH-70, a non-stealthy scout that was similar in design to the OH-58D but bigger and more sophisticated than the older copter was. Bell and Boeing squabbled over the program's delays and rising costs. The Army in 2008 canceled the ARH-70, too.

Having failed twice to replace the OH-58D, the Army instead spent millions of dollars upgrading the old Kiowa Warriors before finally disposing of them without a direct substitute. One of the five FARA prototypes the Army just commissioned will represent the service’s third attempt in a generation to develop a new scout copter.