This Army Helicopter Is Leaving the Black Hawk in the Dust 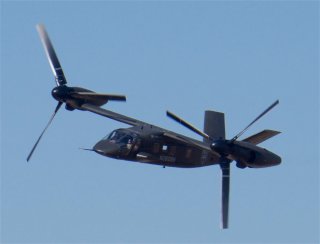 Bell’s V-280 Valor long-range air assault platform has proven its mettle. During recent flight tests, the helicopter maneuvered close to rugged terrain at low altitudes, flew faster than 300 knots and more than 350 nautical miles on a single mission without refueling, and used helicopter-like agility to mass combat power on a landing objective while under enemy fire.

As one of two prominent industry offerings along with Boeing-Sikorsky’s Defiant X, Bell’s V-280 represents an effort to engineer new, paradigm-changing tiltrotor technology. The V-280’s creators envisioned a new tiltrotor configuration able to blend airplane-like speeds with a helicopter-like ability to hover and maneuver close to the ground. Combining an ability to mass combat power with unprecedented speeds can introduce new tactical dynamics, such as an ability to conduct surprise attacks, expediently rescue injured soldiers, and conduct multiple quick-strike air assault raids in close coordination. Bell’s V-280 is engineered to bring this mass-speed combination into operational combat by optimizing speed and agility.

Harvesting lessons learned over decades of successful tiltrotor performance with the V-22 Osprey, Bell engineers embarked upon a mission to architect a high-speed, long-range utility aircraft capable of unprecedented aerial agility in an airframe capable of landing within the same footprint as the existing Army UH-60 Black Hawk. While the Osprey has massed combat power over extended ranges for years, the V-280’s developers sought to advance upon the tiltrotor technology to converge lethal power at extended ranges and high speeds.

The intent is to ensure a revolutionary operational reach with 305 knot-speeds and a combat mission range greater than 350 nautical miles without limiting the Valor’s ability to mass concentrated power where and when the ground force commander needs it. The ability to mass combat power quickly is key to success in conflict, where every minute matters. Tiltrotors greatly increase the ability to mass infantry power and weapons on an objective and a V-280 formation can close on an objective quickly, from unprecedented distances with an exceptionally low acoustic signature. That formation can land in the same landing zones used by Black Hawks as dictated by the 101st Airborne Division’s Gold Book standard, making it fully possible for the V-280 Valor to deliver large numbers of infantry quickly while maintaining the element of surprise far longer than an aircraft with a loud propulsor and main rotor system.

While the V-280 is a tiltrotor aircraft with dual proprotors at the ends of its wings, the aircraft has been designed to land in the same size footprint as a Black Hawk and fit into a standard Army Aviation hangar space. Bell developers designed the aircraft specifically to operate in the same formations as the legacy fleet if need be but also allowed the Army to operate in a variety of other tactical formations. This can in large part be accomplished through what developers describe as an “envelope of performance” unique to the V-280 tiltrotor design.

“The uniqueness in a tiltrotor with two smaller rotors is that they do not have the rotor system hanging out in front of the nose of the aircraft, nor do they have tail rotors or pusher props in the back of the aircraft. This allows the tiltrotor formation to land in the same space required by the 101st’s Gold book standards and more comfortably land closer to each other, nose to tail. If we were in a confined area we could still land in the same footprint as a UH-60, we might need to land in a different axis,” Frank Lazzara, Bell’s director of Sales & Strategy for the Future Long-Range Assault Aircraft, said.

As a former Osprey pilot, Lazzara explained how maintenance performance with the V-22 Osprey was used to closely study the configurations and technologies woven into the new aircraft, with a mind to ultimately engineer a new, clean-sheet design and next-generation tiltrotor.

“Through those cycles of learning, we learned how to build more performance into a smaller tiltrotor with increased agility and a straight wing. The fixed engine allows you to have a crew served weapon for defensive purposes. How can you not be better if you have a proven capability and decades of actual operational use to apply to a clean sheet design,” Lazzara explained.