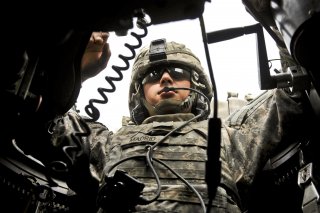 Efforts to build the vehicle are underway along with accompanying Army-industry collaborative initiatives. The new robots will resemble mini-tanks, the Army’s M1126 Stryker Combat Vehicle or robotic infantry carriers.

One of the defense industry companies competing for the opportunity to build weapons for the Army, General Dynamics Land Systems (GDLS), has offered the military service an opportunity to look at and test the Tracked Robot 10-Ton, known as the TRX, which is its vision for the RCV-M mission. GDLS unveiled the TRX family of medium-class robots at the 2021 Association of the United States Army Annual Symposium. The ten-ton tracked robotic TRX vehicle is based on GDLS’s Multi-Utility Tactical Transport program. TRX can conduct a variety of missions with its various tools, including electronic warfare missions and counter-drone operations, according to GDLS.

“We are leveraging our next-generation electronic architecture and the work we have done in autonomous systems for twenty years,” Don Kotchman, the vice president of GDLS, told the National Interest.

Kotchman explained that TRX can be remotely operated from semi-autonomous mode to fully autonomous, depending upon Army requirements and mission objectives. It can be used in a variety of different configurations. It has a thirty-millimeter cannon on a turret. It can launch surveillance and attack drones autonomously. It is likely to be compatible with AeroVironment’s Switchblade, a small drone that can conduct surveillance or function as a munition capable of exploding targets. Also, it is made from lightweight materials so that it can keep pace with fast-moving Armored Brigade Combat Teams or operate at high speeds, Kotchman said.

“The idea is that through universal controlling software, we are going to fly UAVs and maneuver unmanned ground vehicles,” Maj. Gen. Ross Coffman, the director of Next Generation Combat Vehicles Cross-Functional Team for Army Futures Command, told reporters at the 2021 Association of the United States Army Annual Symposium.