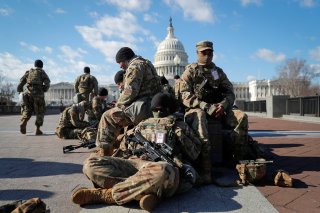 The Army is trying to reevaluate the body composition of soldiers. It has begun conducting a study on this topic at Fort Bragg, according to the Army Times.

The Army is looking at “the body compositions of more than 2,000 soldiers beginning in October, and the service plans to use the data it gathers to determine the future of its body composition program, physical fitness manuals and the much-maligned ‘tape test,’” with the Army’s Center for Initial Military Training leading the study along with the Army Research Institute of Environmental Medicine.

Additionally, the Army is looking at changing height and weight standards after not doing so for more than thirty years, according to Task and Purpose. In fact, Sgt. Maj. of the Army Michael Grinston told Task and Purpose that he has been asked regularly about the standards on his travels of late.

The study kicked off on October 18.

“The rationale is, it was time to go look at it,” Grinston told Task and Purpose. “What technologies do we have today that didn’t exist 30 years ago? There’s a lot of new technology, but can we afford it? Is it better or worse? We don’t know. That’s the whole point of the study.”

The Army expects that it will be six to nine months before they can recommend changes to the Army leadership.

The argument for change is that the standards are based on the sizes that people were many years ago and that has changed.

Back in March, Task and Purpose looked at dissatisfaction with the current fitness standards.

“Bottom line is that we just don’t actually need to assess people” on height and weight, Capt. Kristina Fauser-Martin, an Army performance dietician, told Task and Purpose in that article. “I know that sounds crazy, and it’s probably a bit too radical for what the Army is going to eventually do if they change this, but in the world of sport[s] we don’t see them dictating that you have to be such-and-such. And oftentimes when they do, it does lead to some pretty detrimental effects.”

Fauser-Martin was among the authors of an internal report in 2020 that questioned the current standards used by the Army.

“BMI and weight alone are not reliable indicators of health as they do not provide information on an individual’s overall health status, behaviors, or body composition,” that report said, per Task and Purpose.

“The ACFT is lifting and dragging and throwing things, and you really have to build muscle to be stronger. And in the old fitness test, it did not really—our culture as well has been kind of about the thin runner,” Col. Susan Davis, the director of the Army Medical Department’s Talent Management Program, told Task and Purpose. “I would even go so far as to say no one really cared about your push-ups and sit-ups but if you could run fast, that’s like your calling card. So yeah, the dynamic has really changed.”