The Army is Turning Robotic Combat Vehicles into Tank Hunters 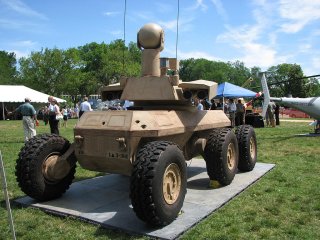 The Army is arming robots with anti-tank missiles to destroy enemy armored vehicles. This capability could prove decisive in tank battles and keep manned vehicles away from incoming enemy fire.

While decisions requiring the use of lethal force will still be made by humans, forward-positioned Robotic Combat Vehicles can now be armed with Javelin anti-tank missiles as well as cannons, grenade launchers, and crew-served weapons. Army weapons developers recently tested these capabilities.

“We shot a Javelin. It’s the shakeout testing and the safety testing so you can conduct live fire with soldiers and make sure that it is safe,” said Maj. Gen. Ross Coffman, Director, Next Generation Combat Vehicle Cross Functional Team, Army Futures Command, in an interview with the National Interest.

The targeting and attack process is expedited by AI. If robots armed with Javelins can find, identify, track, and destroy enemy tanks, they’ll present a formidable threat to adversaries. Robotic vehicles are lighter and faster than most manned vehicles because they don’t require heavy armor to protect crews. This allows the robots to outmaneuver or outrun enemy tanks.

The robots’ weapons are improved by advanced computing and a sensor suite developed to see targets at greater ranges and process incoming information for human decision-makers. These robots will be lethal but also be able to operate as data nodes on the battlefield to send information to other assets nearby.

While stopping short of offering specifics, Coffman said armed robots could support air-defense missions if they could be integrated with existing missiles such as Hellfires or Stingers.

“I think anything is possible. If it is in the inventory, you can put it on the robot,” Coffman said.