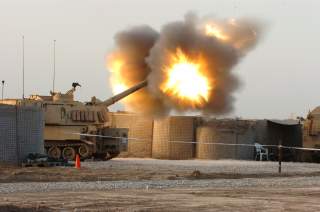 The Army is working on a supergun with a 1,000-mile range that could potentially hit targets in the South China Sea from a gun pit on land, Army Secretary Mark Esper told reporters on Wednesday.

"You can imagine a scenario where the Navy feels that it cannot get into the South China Sea because of Chinese naval vessels, or whatever," Esper said during a media roundtable. "We can – from a fixed location, on an island or some other place – engage enemy targets, naval targets, at great distances and maintain our standoff and yet open the door, if you will, for naval assets or Marine assets."

The experiments with extended-range artillery are part of the Army's look at hypersonic technology, which the U.S. military initially decided not to weaponize years ago.

When Task & Purpose asked Esper why the Army needs artillery that can lob a shell up to 1,000 miles, Esper explained the U.S. military needs to outrange enemy guns.

"You want to be outside the range that they can hit you," Esper said.

The U.S. Army Plans for the War of the Future: Russia, Nukes and More