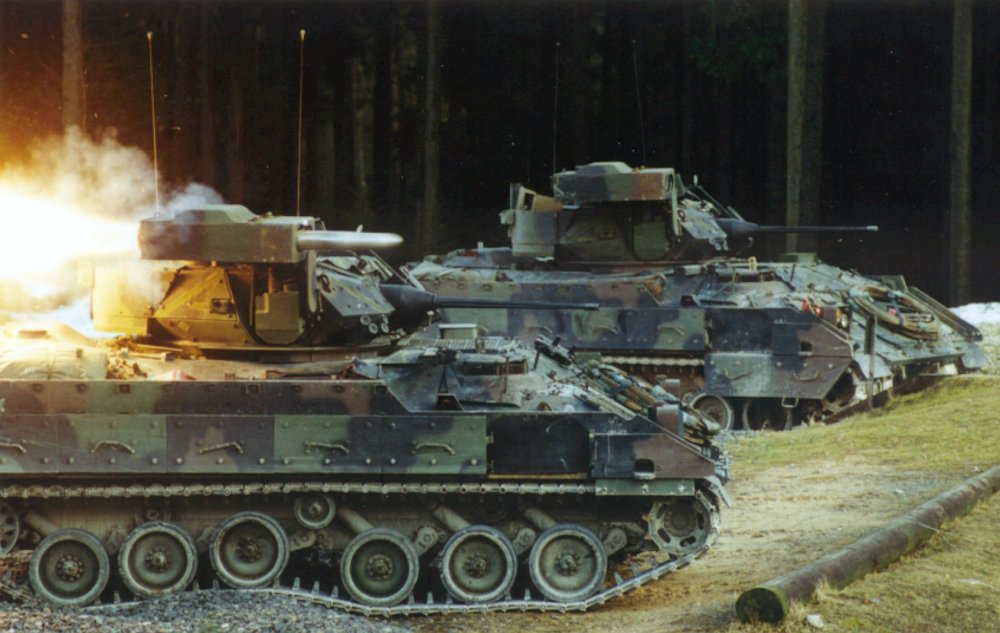 The new vehicle, slated to ultimately replace the decades-old Bradley, will achieve operational combat status as soon as 2026 -- and, according to Army documents, pave the way forward into a new era of major, high-powered, mechanized warfare.

As it enters a new prototyping and test phase for the vehicle, the Army is further refining its ambitious and high-standard requirements. Service reports specify that the new OMFV must conduct unmanned remotely-controlled operations, carry up to six soldiers with a two-man crew and roll off an Air-Force C-17 in groups of two ready to fight in 15minutes. These specifications, right out of the box, immediately call for several unprecedented war-vehicle characteristics; they set the bar high, by requiring robotic-controls and a never-before-seen level of expeditionary requirements for mobility and rapid deployability.

The project has been underway for many years now after the Army asked industry to invest, innovate and push ahead of the technical curve. Interestingly, while the program began with three major industry competitors, it may have narrowed down to one - for the moment. BAE Systems, General Dynamics Land Systems and a Raytheon-Rheinmetall team all began developing platforms; since this time, BAE Systems withdrew its bid and, according to some reports, the Raytheon-Rheinmetall "Lynx" vehicle bid may be on hold from joining the next phase. Citing several news reports, such as Defense News and Breaking Defense, an Oct. 10 Congressional Research Service report says the Raytheon-Rheinmetall offer was disqualified due to not arriving on time. (this is reportedly due to challenges associated with transporting the vehicle from Germany).

The Army has not publically confirmed this information, as they are often hesitant to discuss details regarding ongoing competitions - so many questions regarding the competition may be open or yet-to-be resolved. The Lynx, engineered to fire TOW missiles, launch attack drones and meet Army requirements, is unlikely to disappear from the competition, whatever the scenario. Also, regardless of any potential short-term nuances during the course of the next phase, the Army plans to open the competition to all vendors again several years from now. As a result, any vehicle builder meeting Army requirements will be able to submit a proposal. The Army plans a production competition in the 2023 time-frame.

“Army set tough requirements, so we purpose-built the platform to deliver it ahead of time,” Ret. Lt. Gen. Bob Lennox, Vice President for Global Strategy and Growth, GDLS, told Warrior.

One of the main competitors now moving forward with the Army, General Dynamics Land Systems, has been working with the Army on requirements for many years. The firm of course has a long history of producing armored vehicles such as the Abrams tank. More recently, GD has been successively advancing armored vehicle technology through its construction of future-oriented “Griffin” vehicles. Last year, GDLS showcased its Griffin III as an initial demonstrator vehicle for the OMFV vehicle - then called Next Generation Combat Vehicle. The Griffin’s 1-3 offered an opportunity to discuss options with the Army, GD officials said. The intent, GD developers said, was to receive Army input as a way to try to deliver or exceed the service’s vision for the new vehicle.

“The Army has been clear and consistent with what they have wanted to do for years. The Army wanted industry to invest. We learned what the Army wanted and we started investing to be ready. A few years ago our CEO wanted a major commitment to investments,” Lennox said.

“They (the Army) asked for a system that could take a 3rd-Gen FLIR. We have a host of sensors and cameras on the vehicle. We think the future is going to rely upon open architecture to integrate sensors, EW and new AI applications.” Lennox said. “We meet all the threshold requirements and open systems and many of the objective requirements.

Lennox further extended the discussion by elaborating upon some of GDs strategies and technical applications. For instance, their OMFV integrates an Active Protection System into the vehicle, without needing an applique or bold-on system. APS is of course engineered to used computer-aided sensors, fire control and interceptors to identify and destroy approaching enemy RPG fire in milliseconds.

Its robotic technical functions, it goes without saying, are a tremendous war priority for the Army; an unmanned vehicle can deliver forward-deployed fires, carry weapons and ammunition and function as a sensor node in dangerous or high-threat areas less accessible to manned crews. Using advanced algorithms, the Army seeks to work with industry on manned-unmanned teaming wherein manned vehicles function in a command and control mode while simultaneously operating a fleet of air and ground robotic vehicles. As part of this broader OMFV effort, the Army seeks a light, medium and heavy fleet of Robotic Combat Vehicles to operate in tandem with the OMFV.

The OMFV Congressional Research Service report, citing an Army Robotic Combat Vehicle Campaign plan - says the service requires the RCV - Light to be “less than 10 tons, with a single vehicle capable of being transported by rotary wing assets. It should be able to accommodate an anti-tank guided missile (ATGM) or a recoilless weapon.” RCV-Medium, by extension, can be as heavy as 20-tons and must travel on a C-130 armed with sensors and an ability to fire ATGMs and a medium cannon. Finally, the RCV-Heavy must be a “non-expendable” armed robotic platform transportable by a C-17 and have an ability to destroy enemy tanks and infantry fighting vehicles. While these vehicles can be remotely tele-operated, in the future a single operator will potentially be able to control a small fleet of robotic vehicles using AI.

Interestingly, an essay in NATO Review Magazine takes up this question of AI-enabled future drone technology. The report explains that drones in the “not-so-distant” future will be engineered to evaluate and execute a variety of different contingencies depending upon events in combat.

“Such drones are programmed with a large number of alternative responses to the different challenges they may meet in performing their mission. This is not science fiction – the technology is largely developed,” the 2017 essay, called “Autonomous Military Drones: No Longer Science Fiction,” states.

In effect, this is precisely the kind of progress which will enable a single operator to control multiple drones, reaching new levels of autonomy. This means that autonomous vehicle essentially have “options,” make decisions and choose some courses of action - all while a single human being remains in control making essential decisions about the use of lethal force.

The largest area of focus, along with all of this, may well be the “lethality” requirements of the OMFV. GD has been working the Northrop Grumman Armament Systems to test a new, high-tech 50mm cannon and engineer never-before-seen turret-integration technologies.

“We designed the turret with new advanced, integrated ammo handling systems, fire-control and software. The key is the ability to do this … it is designed for lethality,” Keith Barclay, Director of Strategy and Growth, GDLS, told Warrior.

According to Northrop information, the new 50mm cannon, referred to as the experimental XM913, can hit ranges more than twice as far as the roughly 2 kilometer range of the Bradley Fighting Vehicle’s existing M242 25mm cannon.

Perhaps of greatest significance, the 50mm adds a new suite of more lethal ammunition options, bringing a vastly increased envelope of combat effects. The new gun has a full suite of ammunition, including high-explosive rounds, airburst rounds and armor piercing rounds; it is the same as they current 30mm x 173mm rounds fired by the Stryker, yet with additional “reach and lethality.” The ammunition, a major emphasis of the 50mm’s developmental trajectory, will include both “airburst” ammunition and a “proximity” fuse, Northrop developers say.

Engineers from both Northrop and GD emphasize that the unprecedented range, lethality and targeting systems are the result of extensive collaboration between the two firms.

“We’ve teamed with them. They have built the 50mm cannon and we have built the turret to support it. It requires much more electrical power,” Barclay added.

Additional electrical power is a fundamental element of Army and industry OMFV development; much has been discussed over the years about how the Bradley is “maxing” out its upgradability in terms of weapons, power, sensors and other essential areas.