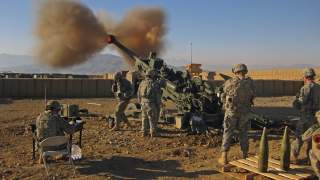 The new gun will replace the M777 towed howitzers used by Stryker Brigade Combat Teams (SBCT), according to the Request for Information, a market survey that will tell the Army what the defense industry can provide. Deployment would be in the early 2020s.

The Army emphasizes that it wants a highly mobile weapon with the latest fire control and other technologies. "This SBCT 155mm howitzer, is required to retain the key transportability and firepower attributes of the current systems while taking advantage of the modernization efforts associated with long range precision fires as well as the advancing mobility requirements," the RFI said.

First fielded in 2005, the 4-ton M777 is towed by trucks such as the Medium Tactical Vehicle Replacement (MTVR), and any truck of at least 2.5 tons. It can fire up to four rounds per minute out to a range of 15 miles, or 19 miles using rocket-assisted projectiles. Manufactured by BAE, the M777 is used by the U.S., Canada, Australia and India, with more than 1,200 guns ordered. In American service, in addition to the Stryker brigades, it's the artillery backbone of light infantry, airborne and mountain units.

The M777 has been used in Iraq and Afghanistan, proving particularly useful in the Afghan war, an environment where heavy armored vehicles are hampered by mountainous terrain and primitive infrastructure. The Army even plans to turn the M777 into a giant sniper rifle.

But now the Army wants a more modern weapon. While not providing specific numbers for what it wants, the Army says it particularly desires that the new howitzer have these attributes:

- Transportability by land and air

- Survivability of the weapon and its crew to hostile fire

- Ability to use various U.S. and NATO artillery rounds

- Ability to shoot with direct fire straight at targets

The debate over towed versus self-propelled artillery is an old one. In more advanced militaries, self-propelled howitzers are the norm: vehicles such as the 28-ton U.S. M109A6 Paladin, a self-propelled 155-millimeter howitzer, can rapidly move, can displace to new positions under fire, and offer a degree of armored protection to their crews (though some look like tanks, they are too lightly armored  to be used as such). Some armies use wheeled howitzers, such as France's CAESAR, that are mounted on a truck chassis to save money and reduce weight.

On the other hand, towed guns are lighter, cheaper and -- most important -- are far more mobile. They can be transported much more easily by air and sea, and they can use roads and bridges that armored vehicles can't. While an armored vehicle that breaks down can be a hassle to fix or tow away, a damaged prime mover for an M777 can be replaced by another truck. No small consideration considering that most of today's conflicts are fought in areas with poor infrastructure.

Exposed: The U.S. Army Tested Its Own Nuclear ‘Dirty Bombs’