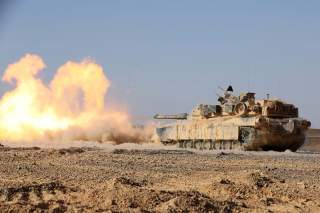 Self-driving cars make some people nervous, especially after a series of fatal accidents involving autonomous automobiles that didn't stop when they should have.

But what happens when a robot tank fails to hit the brakes?

Concerned about "the dangers of a malfunctioning robotic vehicle," the U.S. Army has launched a research project to develop emergency braking systems for autonomous vehicles. This is becoming particularly important as the Army develops kits that can transform supply trucks into self-driving vehicles.

"As autonomous vehicle technology advances, the Army will need to outfit existing vehicles with ‘drive-by-wire’ kits, which gives the ability to control various vehicle functions through the use of electrical means, in order to fix this technology economically," the Army says.

The commercial automotive industry has developed various kits that can be fitted to automobiles, such as steer-by-wire or brake-by-wire, but they have their own problems. "These limitations include added latency to actuation, minimal system security, miscalibration, and other unintended malfunctions that may not accompany a custom solution which undergoes extensive testing and validation specific to the platform."

The goal is to develop an emergency braking system that allows a robot vehicle to abruptly stop in any terrain and while performing any driving maneuver. The technology will be incorporated into commercial-off-the-shelf, drive-by-wire kits.

"The system should be capable of incorporating specific vehicle dynamics through an easily programmable interface such that the vehicle will optimally decelerate safely to a stop from any speed," the Army says. "The system should also include a generic interface for an automatic urgent stop trigger that a developer could use to designate speed limits, geographic boundaries, critical message sets, etc."

"In addition, the system should also allow for consideration and identification of characteristics from the operating environment which may affect slip, skid, and braking force necessary to help maintain tractive contact by the vehicle during an urgent stop procedure and avoid uncontrolled skidding or rollover," the Army explains.

The Army also wants an emergency braking system that kicks in when the robot vehicle loses contact with its human controllers. "As a safety-critical system, any remote operating devices connected to the system will trigger an emergency stop should connection be lost between the remote and the system on the vehicle. The system should also be capable of operating without GPS."