The Army Wants U.S. Companies to Crank Out Ammo for Russian Guns 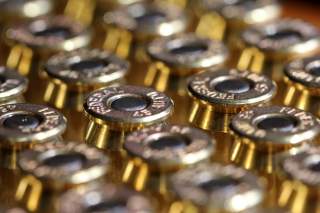 So, the deal would be that America would lift sanctions on Russia, so Russian companies can sell ammunition to the Americans, who can then send it to U.S. allies using Russian weapons (and who may use them against Russian-backed forces in places like Syria)? Not likely to happen.

(This article was published earlier this year.)

Why does the U.S. Army want American companies to make ammunition for Russian-designed weapons?

For the same reason that U.S. Special Operations Command wants U.S. companies to manufacture Russian-designed rifles and machine guns. Many groups that the U.S. supports, such as in the Middle East, have been accustomed to using Soviet and Russian weapons for years. The theory is that rather than force them to switch to Western arms, it’s easier for the U.S. to send them Russian weapons and ammunition made in America.

The announcement by Army Contracting Command merely says that the Office of the Project Manager, Maneuver Ammunition System, is conducting a market survey to determine which manufacturers can produce ammunition for a shopping list of Russian weapons. But what a shopping list! The Army seems to want to recreate half the Soviet Cold War arsenal. The spreadsheet posted by the Army includes up to ten million AK-47 rifle and PKM and DShK machine gun rounds, 250,000 RPG-7 rockets, and bullets for Russian pistols.

The Army even wants manufacturers to produce small quantities—one to fifty each—of Russian anti-tank missiles and their launchers, including the AT-3 Sagger and the AT-14 Kornet. Chinese HJ-8 Red Arrow missiles are also on the list. Interestingly, the U.S. Army also desires to know if manufacturers can produce weapons by U.S. allies: the survey asks whether up to fifty French/German-designed Milan 3 missiles and ten launchers can be produced.

The Army plan echoes a 2017 U.S. Special Operations Command project that sought American manufacturers to build Russian-designed machine guns. SOCOM said it wanted to “develop an innovative domestic capability to produce fully functioning facsimiles of foreign-made weapons that are equal to or better than what is currently being produced internationally.” SOCOM eventually awarded a contract to a company, despite questions as to whether it would be cheaper to buy weapons and ammunition on the international market (China dumps plenty there) versus custom manufacturing in the United States.

When news of that SOCOM project broke, Russia gleefully accused America of copying its weapons (a charge frequently leveled by America against Russia and the former Soviet Union). Naturally, Russia couldn’t resist taking a dig at the latest plan. Arms manufacturer Rostec said it would be happy to sell ammunition to the United States—but only if American sanctions on Russia were lifted.

“At present, the Russian ammunition industry is ready to supply to the international market the whole range of ammunition for combat, service and civilian weapons of the Soviet/Russian standard, and also to certain models of NATO weapons,” Rostec told Russian news agency TASS.

“Basic characteristics demonstrate that modern Russian ammunition is the world’s best,” the company boasted. “Original and high-quality Russian-made ammunition can be supplied to the United States only if relevant sanctions are lifted.” Those sanctions, which block deals between American companies and Russian arms makers, were imposed by the Obama administration after Russia’s 2014 annexation of Crimea. The U.S. government recently sanctioned several Russian companies, as well as several Chinese firms, for violating international agreements regarding arms sales to Iran and North Korea.

So, the deal would be that America would lift sanctions on Russia, so Russian companies can sell ammunition to the Americans, who can then send it to U.S. allies using Russian weapons (and who may use them against Russian-backed forces in places like Syria)? Not likely to happen.

(This article was published earlier this year.)