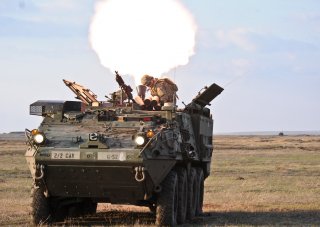 Epirus’s Leonidas is essentially a trailer-mounted counter-electronics system that can eliminate multiple drone targets in a wide area or pinpoint single targets. A video of the Leonidas demonstrates the platform’s ability to take out numerous swarms of drones as well as single targets. However, artwork released by Epirus shows the Leonidas mounted to a Stryker roof rather than in a towed trailer configuration.

Along with the Leonidas anti-drone system, the companies also explained that they will be developing robotic vehicles that “feature modular architecture to maximize scalability and support future mission needs.” General Dynamics currently produces several different unmanned ground vehicles that the Army has evaluated.

Raytheon explained that the development contract had been awarded after “a series of realistic scenarios designed to evaluate the performance of the system, establish threshold requirements for the laser and demonstrate its technical maturity and readiness.” During the shoot-off, “soldiers operated the system and effectively tracked, identified and engaged a variety of targets.”

Unlike traditional air defense systems, which fire small surface-to-air missiles or large-diameter projectiles, a directed-energy system has a virtually unlimited magazine capacity and does not need to periodically reload as long as the system is supplied with sufficient electrical power. Cost per shot is therefore dramatically reduced, a boon to budgets and logistics.

The U.S. Army’s new SHORAD competition has two strong contenders, though which system ultimately goes atop the Stryker armored vehicle remains to be seen.