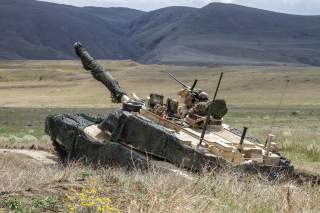 Units of forward positioned Army soldiers may not have quick access to battery recharging and may therefore depend entirely upon the functionality of their batteries - needed to power night vision, radios, small soldier-worn sensors, portable laptops for drone control and other combat-essential items. Without the requisite battery power to advance, soldiers might be forced to retreat or, of even greater consequence, become far more vulnerable to enemy fire.

It goes without saying that attacking soldiers, especially those on the move on foot, need lightweight, electrically powered equipment for communications, data sharing, enemy tracking, targeting and some weaponry. Therefore, for many years Army weapons developers have been closely focused upon “lightening the load” for soldiers to increase combat quickness, endurance and functionality; this broad-sweeping effort includes not only lighter boots, body armor, belts, backpacks, uniforms and even some weaponry.

Iyer explained how scientists are now working intensely to manufacture new smaller, safer and more efficient electricity-generating Fuel Cells for soldiers in combat. Larger form-factor Fuel Cells already exist. For example, Fuel Cells are now being integrated into “Auxiliary Power Units” for Abrams tanks. In a manner quite similar to the smaller Fuel Cells now under development, these larger Fuel Cells are being integrated to enhance and extend the performance of the Abram’s sensors, weapons, on-board electronics and computer systems. Like many armored combat vehicles, Abrams tanks are very power-dependent and fast-emerging modernization is increasingly requiring the vehicle to generate more electrical power.

This new effort, however, is quite different that ongoing work to develop Fuel Cells suited for larger combat vehicles; it is instead focused upon an advanced effort to engineer entirely new Fuel Cells. Most existing Fuel Cells, Iyer explained, are now created by “oxidizing” Hydrogen to generate electricity. The new method, which Iyer says may still be more than five years away from being operational, replaces Hydrogen with Methanol.

“We are looking at alternatives to oxidizing Hydrogen Fuel Cells and searching for materials that act as a catalyst in Methanol oxidation. When Hydrogen is oxidized, you get water and it is much harder to control than Methanol. When Methanol is oxidized it produces power,” Iyer told Warrior.

Alloys, which are substances made by combining and mixing metals and non-metallic objects, are essential to Fuel Cell construction.

“Alloys are formed by two-to-three different materials. We have a combination of alloys we put together, and we want to know what happens when we mix “x” with “y” and “z,” Iyer explained.

“We look to determine desired material properties by analyzing what produces changes in materials,” Iyer said.

Key material properties can be discovered by finding critical points Iyer referred to as “hidden variables.”

“There are these critical points where things change immensely. By mapping out where those boundaries are, we look at phased transitions to identify peaks and valleys which show you how the properties of how the materials change,” Iyer said.

“The surprising aspect of this is that AI and machine learning can play a role,” Iyer said.

The search to discern ideal new materials, by analyzing how properties change, requires massive amounts of data collection - a circumstance which is now enabled by fast-evolving applications of Artificial Intelligence, Iyer explained. Gathering and analyzing enormous volumes of microscopic data is a lengthy, laborious and complex process.

“AI is used to search through the data to identify those big changes in properties. If you do this blindly it will take an exponential amount of time. You have this data which is voluminous and takes months for a material scientist to sift through,” Iyer explained.

The ongoing process relies upon extensive collaboration between scientists and AI experts looking at how to solve data-volume problems by using AI.

AI can take a graph of data and “figure out where peaks and valleys are,” essentially pinpointing changes and fluctuations in the materials to find those “properties” best suited for building new alloys essential to the construction of fuel cells. This is of tremendous consequence to the current discovery process, as AI is known for having a lightning-fast system of gathering new information -- and instantly comparing it against a vast or seemingly limitless database -- to find moments of relevance, perform close to real-time analytics and solve complex problems.

The process for this analysis, Iyer explained, involves the use of a complex scientific methodology known as “X-ray Crystallography.”

X-ray crystallography, as defined in scientific journals, is a specific technique used for assessing the atomic and molecular structure of a crystal which can cause a beam of X-rays to “diffract.”

This process continues to be widely used by health experts to analyze proteins and certain materials needed for pharmaceutical drugs, among other things.

By measuring the angles and intensities of diffracted beams, scientific experts can determine the “density of electrons within the crystal,” according to a “Metallurgy and Material Science” essay from the National Institute of Technology, Rourkela, India. This process, the paper states, helps analyze the structure and properties of molecules and atoms, such as the “size of atoms.” The X-ray crystallography process is used to discern differences among various materials … especially alloys - of great significance to Fuel Cells.

Interestingly, an essay from the “Journal of Clinical Pathology” from as far back as 2000 points to the data-gathering and data-analysis challenges fundamental to the X-ray Crystallography process. By referring to “algorithms and software packages,” the essay seems to anticipate the kinds of complexities and problems scientists are now using AI to address.

“The processing of the diffraction data is mathematically complex. Fortunately, however, well established algorithms are available in many software packages and program suites. Their existence enables the relative newcomer to process data and calculate an electron density map,” the paper states. (Paper archived in the US National Library of Medicine, National Institute of Health. M.S. Smith & JHJ Martin.)

The extensive volumes of data this process requires makes it an ideal area of great relevance to AI, as Iyer explained. Along these lines, in a manner consistent with Iyer’s point, the essay goes on to explain that the amount of data gathered through the X-ray Crystallography diffraction process is so vast that it often needs to be “scaled” into “data subsets.”

Of course the essay, while pointing to the impact of software and algorithms upon the X-ray Crystallography process, was written at a time when humans would need to perform enormous amounts of data processing relative to what AI-empowered modern techniques can accomplish.

While the research is still fairly early on and not likely to fully evolve into operational status for at least another five years, initial laboratory work is already showing great promise.

“The next step is for a material scientist to take those identified particular materials and do further testing,” Iyer said.