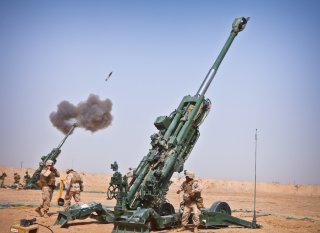 Historically, 155mm artillery rounds were conceived of purely as area weapons, an imprecise way of blanketing a territory with suppressive fire enabling troops to maneuver during combat. But in recent years, this has changed dramatically: now, not only can 155mm rounds be precision-guided to within one-meter of a specific target 30km away, but the guidance and explosive characteristics can also be tailored to give attacking commanders more options.

In 2007 during Operation Iraqi Freedom, the U.S. Army debuted what was a paradigm-changing development at the time, the advent of GPS-guided artillery. Excalibur, then a newly engineered round, used GPS and Inertial Measurement Unit technology to pinpoint enemy targets while offering new tactical options to commanders. Nearly fifteen years after the Gulf War which introduced the world to GPS-guided air munitions, Excalibur brought the technology to land warfare. This took place at an auspicious time, given that the ground counterinsurgency war in Iraq increasingly required levels of precision to find and strike small groups of terrorists, vehicles, or specific targets in otherwise populated areas. Precision-guided artillery, therefore, reduced collateral damage, saved lives, and enabled attacking units to operate with fewer logistical constraints as they could maneuver with less ammunition.

Now the Army is bringing artillery to the next level by doubling the range of its precision artillery to 70km through its Extended Range Cannon Artillery program. ERCA, as it’s called, can fire precision rounds much farther with the greater speed and thrust provided by its longer cannon barrel. In development for several years, the ERCA program not only improves strike range but also allows for a number of additional upgrades to the artillery itself to enhance performance and lethality.

“With some software updates, can we adjust the flight trajectory so that we can get increased range? The answer has been yes, we've been able to do that and extend the range of the currently fielded Excalibur. We're gonna get that out to 70 kilometers, and then that's helping us with an enhanced lethality version of the Excalibur called Excalibur hit-to-kill. We will have a target seeking sensor and get out to extended ranges, using maneuverability to course-correct and steer the target to destroy it,” Maj. Gen. John Rafferty, director of the Long Range Precision Fires Cross Functional Team at Army Futures Command, told The National Interest in an interview.

The round’s enhancements are quite comprehensive as programmable fuses can make the rounds explode to meet specific mission requirements while software upgrades can add new guidance technologies. A “shaped round” can tailor a 155mm round for maximum penetration and explosive effect, whereas a “shaped trajectory” can adjust course in flight to hit an enemy vehicle on the other side of a mountain or under a bridge. The extended range not only enabled attack from further stand-off ranges but can also help leverage course-correcting flight technology.

“What else can be done with this very capable projectile? Let's see if we can shoot it farther, and then let's see what we can do with the trajectory to get the most range out of it so it can withstand greater chamber pressure and higher G- loads for increased muzzle velocity. The projectile itself has fins and canards that enable it to steer,” Rafferty said.