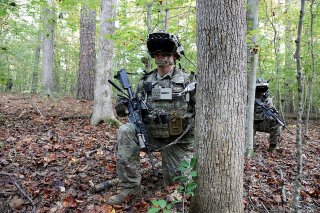 Called the Integrated Visual Augmentation System (IVAS), the technology consists of a set of soldier goggles with built-in sensors to expand upon the abilities of human sight to improve close-quarter combat. The Army announced in October that the system would be delayed until 2022.

Army press releases describe the technology in terms of a Heads-Up Display device designed as a single system to allow soldiers to train, fight, and compile information from sensors.

The National Interest previously spoke with former Army Acquisition Executive Dr. Bruce Jette, who explained how IVAS helps give soldiers a three-dimensional view they would not otherwise have.

“We don’t perceive distance with one eye, we just see larger or smaller - but if I can put it in both eyes I can get the object in 3D," Jette said. "To do that I need to have the sensing system to know where the eye is looking and focusing. The IVAS does that. It determines what you are looking at and what type of object you are looking at and focusing on to generate a 3D image in front of you. The good part about this is I don’t need all those heavy optics on my face."

Jette also said that IVAS draws on Human-Machine Interface to connect some of the neurological processing of human vision with software developed to help with depth perception, peripheral vision, and other nuances associated with human vision. With this kind of enhancement, U.S. Army soldiers will be in a better position to access enemy force location data, map locations of multiple targets at one time, and inform the shooter of key attack specifics such as range and location details of enemy forces.