What's Holding Up the Army’s Deal for HoloLens Technology? 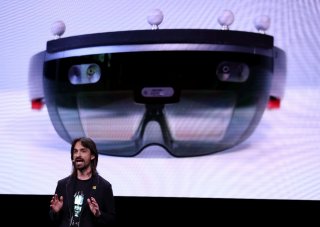 Back in 2018, Microsoft reached an agreement with the Army on a $479 million contract to make HoloLens mixed reality technology available. This past May, the Army reached an expanded deal with the tech giant to “supply customized HoloLens augmented reality headsets for thousands of U.S. service members” to the tune of $22 billion, Bloomberg reported. Microsoft said at the time that the devices would be manufactured in the United States.

The company, in June of this year, laid out how the program would work.

“The devices, using what is called the Integrated Visual Augmentation System (IVAS), will allow soldiers to see through smoke and around corners, use holographic imagery for training, and have 3D terrain maps projected onto their field of vision at the click of a button,” a Microsoft blog post said. “The Army plans to start equipping soldiers with the headsets in September, and leaders say the devices will fundamentally change how they operate and what they can do.”

However, the arrival of the HoloLens, described by the company as an “Integrated Visual Augmentation System (IVAS), will be delayed.

The Army made the official announcement.

“The Army decided to shift the IVAS Operational Test and fielding to a date later in FY22. The Army is fully committed to its partnership with Microsoft to advance specific technologies to meet operational requirements and maximize warfighter impact,” the press release said.

“The Army conducted an Adversarial Electronic Warfare and Cybersecurity Test in September 2021 and plans to execute testing regularly throughout FY22. This decision allows the Army and Industry team to continue to enhance the IVAS technology platform ensuring Soldiers achieve overmatch in Multi-Domain Operations. The Army intends to continue developing and fielding this revolutionary, first-of-its-kind technology in FY22.”

Reuters reported this week that the deployment of the devices will now take place a year later than planned, in 2022. After claiming that they would be deployed by the end of the 2021 fiscal year, which ended in September, the Army now puts the date in September 2022.

Jane's had reported earlier that the Army had “postponed plans to field Microsoft’s HoloLens 2 augmented reality (AR) system to soldiers while it ‘matures’ the technology.”

As Task and Purpose reported at the time, some Microsoft employees were less than thrilled with the Army deal when it was first announced.

The employees stated that they “do not want to become war profiteers,” or participate in the Army’s “ability to cause harm and violence.” But CEO Satya Nadella stood by the deal at the time. He told CNN that “we made a principled decision that we’re not going to withhold technology from institutions that we have elected in democracies to protect the freedoms we enjoy.”