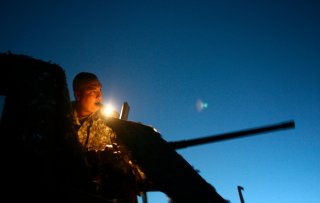 Electronic warfare  (EW) is the dark wizardry that seeks to turn these indispensable sensor and communications links against their users. Transmissions can be listened in on to gain compromising intelligence (COMINT) or used to identify what units are in a theater (electronic intelligence or ELINT). Electromagnetic sensors called Electronic Support Measures (ESM) can even geo-locate a transmitter’s position precisely enough for targeting with deadly attacks. Electronic Attack capabilities (jammers) can drown out communications and blind radars when they’re needed most. Even offensive hacking can disrupt or mislead adversary systems.

The U.S. Army is now seeking to wrap all of these potent capabilities in one tidy armor-plated box, having announced on September 27 it was awarding $9.6 million to Lockheed Martin to equip several of its Stryker armored vehicles with an electronic warfare system combining an unprecedented trifecta of capabilities: cyberwarfare, signals intelligence and electronic attack.

This followed a sixteen-month competition in which Lockheed and DRT/Boeing both submitted three proof of concept vehicles for evaluation. The Army has requested a further $39 million for the program, presumably to fund testing and early procurement of the new EW vehicle.

The electronic warfare Stryker is opaquely designated the Terrestrial Layer Systems-BCT because it will have the mobility and armor protection to accompany on the ground mechanized Brigade Combat Team (BCT) at the forefront of the fighting.

The Stryker is a family of 8x8 wheeled armored personnel carriers armored against mines, small arms, and artillery shrapnel. Besides the basic M1126 troop carrier model, the Army is also inducting a Short-Range Air Defense model called the Stryker M-SHORAD designed to protect U.S. mechanized units in battle against low-flying aircraft, missiles, and drones using Stinger and Hellfire missiles and a 30-millimeter gun. There’s also a Stryker-DE model armed with a laser for more efficient defense against drones.

The Stryker BCT-TLS variant, however, is based on the eighteen-ton M1133 armored ambulance model because it has the necessary additional electrical outlets. Lockheed’s concept art for the Stryker BCT-TLS shows three large dome antennae on the vehicle’s center and rear hull, as well as side hull-mounted sensors. Undoubtedly, cramming together so many powerful antennae in one hull poses significant technical challenges. An Army presentation also notes it will use machine-learning to automate electronic attack missions and feature fast tuning directional finding capabilities.

The TLS-BCT is quite a comeback because at the end of the Cold War, the Army retired its electronic attack capabilities. In the 2000s the service only focused on fielding short-range jammers to protect convoys in Iraq and Afghanistan from remotely detonated Improvised Explosive Devices (IEDs).

Instead, U.S. Air Force and Navy EC-130H Compass Call and EA-18G Growler aircraft respectively took on electronic and cyber-attack roles. But these could not persistently protect ground units when combating a more formidable adversary with powerful air defenses.

Lethal conflicts in the 2010s suggest the pivotal role ground-based electronic warfare may play in future conflicts. In the war in Eastern Ukraine in 2014-2015, Russian electronic warfare companies were able to geolocate Ukrainian headquarters and hack into soldiers’ cellphones, allowing targeting of artillery strike that killed hundreds. Jamming also crippled Ukrainian command and control capabilities just as Russian offensives were underway. A U.S. Army study group concluded that the Russian EW units were extremely effective and that highly networked U.S. command posts would prove vulnerable to them if they didn’t adapt.

Now the Army plans to field TLS-BCT vehicles in an Electronic Warfare platoon in each maneuver brigade’s Military Intelligence Company.

Currently, field formations are fielding several lighter and less versatile stop-gap EW vehicles. Mechanized units use the Tactical Electronic Warfare System (TEWS) mounted on a basic M1126 Stryker hull. Light infantry use the TEW-Light on a Flyer72 special operations truck which can only perform ESM duties. These are supplemented by AN/MLQ-44A Prophet signals intelligence trucks. All will be passed down to National Guard units as the Army begins receiving TL-BCTS.

However, Armada International reported in December 2020 that these won’t all use the Stryker TLS variant. Instead, armored brigades equipped with Bradley fighting vehicles will receive the equipment on tracked Armored Multi-Purpose Vehicles (AMPVs), which use largely the same hull as the Bradley. Light infantry brigades would also get their own vehicle, presumably on a Mine Resistant Ambush Protected (MRAP)-style chassis. However, there’s been little information since, regarding additional TLS-BCT variants.

Regardless, TLS-BCT has open architecture and can integrate with other systems using its shared C5ISR/EW Modular Open Suite of Standards (CMOSS) , including a drone called the MFEW-Air-Large. This will actually be a pod mounted on the standard MQ-1C Gray Eagle drone already used by brigade Tactical Unmanned Aircraft System (UAS) companies, which will be able to detect and geolocate emitters up to an estimated 240 miles away, and attack with its own jammer. However, funding for MFEW-AL was removed from the 2022 defense budget but may be restored in later years.

The Army is also interested in a smaller pod system (MFEW-AS) with a range estimated at 173 miles for mounting on a smaller Class 3 drones like the RQ-7B. This system, pegged for delivery in 2030, could serve in a more forward outrider role compared to the larger drone. There’s also an obscure MFEW-Rotary program to defensively support future Army scout helicopters.

TLS-BCT and the MFEW drones both will be connected to higher headquarters using the Electronic Warfare Planning and Management Tool (EW-PMT) which can output to the laptop-based Raven Claw system.

EW-PMT synthesizes signals intelligence from multiple sources to generate a global picture of electronic activity in a battlespace and also manages friendly systems on the electronic spectrum to make sure they don’t interfere with each other. Future “capability drops” are planned to make it capable of remotely controlling EW assets from afar, enhance targeting of electronic attacks and integrate more cyber-capability.

Higher-level headquarters also need electronic warfare assets, so the Army plans to introduce a longer-range system called the TLS-EAB for “Echelon Above Brigade” that will be used by Divisional and Corps-level electronic warfare companies, as well as being integrated into the Army’s unique new brigade-sized Multi-Domain Taskforces.

The two types of TLS-EAB systems will be situated further away from the frontline and won’t require armor protection, so they’ll be installed on Oshkosh FMTV medium tactical trucks.

The first variant will effectively be a longer-range version for the TLS-BCT and have a crew of eight, divided between SIGINT and EW personnel, and combine signals intelligence, jamming, radio direction-finding, and hacking capabilities.

However, there will also be a High-Energy Defensive Electronic Attack version with the mission of defending headquarters and other vital rear-area units using jamming and hacking to disable or misdirect incoming drone and missile attacks. It may even be able to prematurely detonate radio-fused artillery shells. This will apparently be networkable with the Army’s IBCS air defense network to enhance response time against incoming threats, as well as with national technical means (ie. missile-warning satellites).

Given the pivotal role electronic warfare already played in the twentieth century, its fielding of the TLS arguably is a reassuring sign that the Army grasps that both field formations and rear-area support units will need beefy electronic warriors to survive on potential battlefields of the future.