The Army's New Machine Gun Can Really Do Some Serious Damage 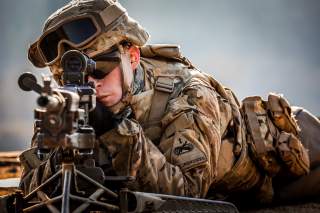 A game changer or not?

The U.S. Army has selected a new submachine gun for special security missions- and the winner of the procurement contest may surprise you.

The Brügger & Thomet APC9K has been hailed the winner of the Sub Compact Weapon program, beating out well-seasoned military & police competitors such as the American Sig MPX and the Czech-made CZ Scorpion Evo.

Made primarily of polymer and sporting translucent magazines, the APC9K SCW will be used for close protection duties and other situations where a 9mm submachine gun or carbine would be preferable to a 5.56 platform.

According to Defence Blog, the U.S. Army Contracting command will be ordering around 350 of the SCWs, with a potential additional order of 1,000 more.

The original competition, which began in May of 2018, had over ten companies providing options. One of the requirements was that the weapon had to be optimized to fire 147-grain 9mm ammunition.

Designed for personal security details (PSD) and other specialty personnel within the Army, the B&T SCW will provide an edge where concealability and firepower are forced to meet in certain situations.