The Army's New Tank Is Here: Check Out the M1A3 Abrams Tank (No Lasers Needed) 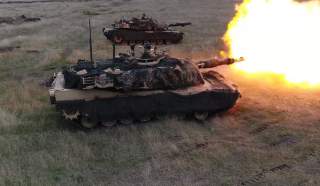