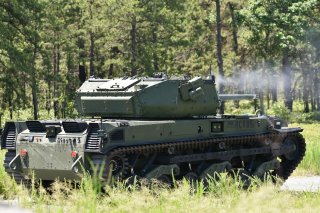 Could small armies of armed robots descend from the sky into hostile enemy fire? Could they storm ashore from transport craft in support of an amphibious assault?

That seems to be the goal of Army weapons developers arming and testing a new generation of combat robots. Grenade launchers, anti-tank weapons, and machine guns are arming combat robots in development. Properly-networked robots will be capable of finding, tracking, and destroying targets when directed by human decisionmakers. It remains the Department of Defense’s policy that armed robots will not use lethal force unless directed by a human.

The Army is expanding its concepts of operations for armed robots into multiple domains, given rapid advances in networking technologies and new strategic priorities. Army weapons developers have said that armed robots are needed in high-priority areas such as Europe and the Pacific.

“We got a demand signal from other theaters, to have robots come and deploy to both the Pacific into Europe for operations and exercises and operations,” said Maj. Gen. Ross Coffman several months ago. Coffman is the director of the Next Generation Combat Vehicle Cross Functional Team at Army Futures Command.

Robots will not use lethal force autonomously, but emerging AI-enabled algorithms are increasing the number of functions robotic platforms can perform without human guidance. This allows armed robots to be viewed and developed as multi-domain platforms, which provides new capabilities.

“So these could easily contribute to an amphibious operation,” Coffman said. “They are C-130 transportable as well, so you can get them over anywhere.”

In Europe, a C-130 carrying robots could land in a forward environment to unload armed drones to attack enemy formations. The armed Robotic Combat Vehicles could roll off a cargo plane and perform surveillance, targeting, or resupply missions in high-risk dangerous territories without human intervention. If American forces are operating with air superiority, then small groups of robots could be paradropped from aircraft as well.

Robotic platforms could also support amphibious and maritime warfare by launching from transport ships equipped to move heavier robots into combat. The Navy’s new Ship-to-Shore Connector is built to land M1 Abrams tanks ashore, so it certainly could carry armed robots. Such an operation could potentially bring a tactical advantage to an amphibious assault as it could bring heavy firepower ashore under enemy attack without putting sailors, marines, or soldiers at risk.