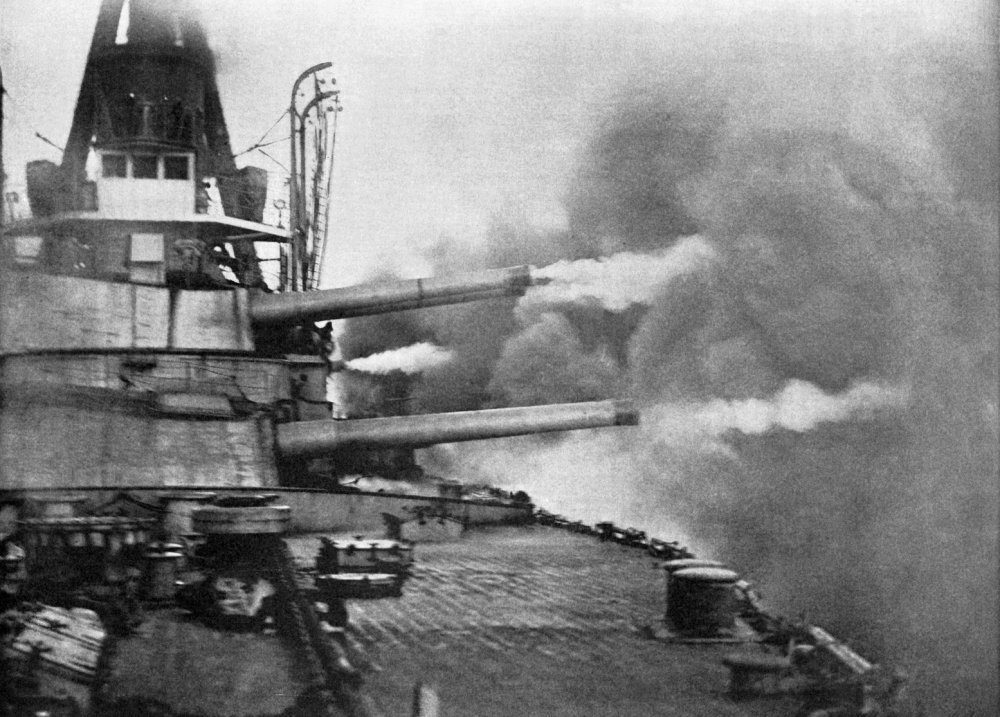 Imagine a squadron of U.S. battleships approaching a Japanese battle line. From the bridge of the USS Iowa, spotters can clearly make out the silhouettes of the battleships Yamato, Musashi, Nagato, and others. Yet the Japanese ships make no smoke, and appear to roll helplessly on the waves. A B-29 of the U.S. Army Air Force has dropped an atomic weapon in the vicinity of the Japanese fleet, disabling if not sinking many of its most powerful ships.

Some thinking on how to use the atomic bomb against Japan envisioned an outcome like this. If the Imperial Japanese Navy had done better in the early stages of the war, it might still have had ships in 1945, and it might have held the key islands that enabled the United States to use the atomic bomb against the Japanese homeland. In the wake of the war, the United States extensively tested the effects of atomic weapons on warships. That testing can inform how we evaluate the impact of an atomic bomb upon the main body of the Imperial Japanese Navy.

While the Imperial Japanese Navy (IJN) lost much of its strength in 1942, it remained a viable, effective force until the battles of Philippine Sea and Leyte Gulf in 1944. Had various operations in 1942 been more successful, it is possible to imagine a still-effective IJN in operation in mid-1945, when the atomic bomb became available. The success of the strategic bombing raids upon Japan required the use of island bases in the Pacific, as efforts to launch B-29 raids from China had largely failed. As long as the IJN could prevent the U.S. Navy from seizing islands in range of Japan, it could limit the threat of strategic bombing (including atomic) attacks against the Japanese homeland. This might have inclined the United States to direct such attacks against proximate military targets, including the fleet concentrations of the IJN.

The United States tested the impact of atomic weapons on naval vessels in the immediate postwar at Bikini Atoll. One test, referred to as “Able,” involved an airburst above an assembly of Allied and Axis warships. The other, “Baker,” involved an underwater explosion. It is most likely that any attack against ships underway would come from the air, thus making Able the more relevant test for evaluating damage against a task force. The Able test included a wide variety of warships, including battleships, aircraft carriers, cruisers, and destroyers. Most of these vessels in proximity to the test received significant damage, and some sank. Still, the damage assessments call for some caution, because most of the ships used in the Able test were old, some were damaged, and none had the advantage of active damage control.

Only the B-29 Superfortress was large enough to deliver an atomic weapon under combat conditions. At conventional operating altitudes (in excess of 30,000 feet), the B-29 was not particularly vulnerable to either anti-aircraft fire from Japanese warships or Japanese combat air patrol. But at safe altitudes, accuracy would become an issue. Even under the best conditions, B-29s struggled to hit their targets with the accuracy typically necessary in naval bombing. Enola Gay missed her target in Hiroshima by about 250 yards; the bomb dropped at Test Able in the Bikini Atoll missed by 650 yards. As with horseshoes and hand grenades, “close” matters with nuclear weapons. Nevertheless, given the geographic extent of a tactically deployed task force, the specific point of detonation would matter a great deal for overall damage assessment.

We will imagine a Japanese battle line consisting of a force similar to that which set forth at the Battle of Leyte Gulf; Yamato and Musashi, Nagato, Kongo, and Haruna. Arrayed for battle in a column formation might have left some 500 yards distance between ships. Columns of cruisers and destroyers would have operated on either side. The space between columns varied widely during the war, and across different tactical situations. The extent of dispersal would matter a great deal for the damage inflicted by a single weapon.

Even a bomb detonated exactly at the center of the Japanese line (HIJMS Nagato) would not cause equivalent damage across the line. Under such circumstances Nagato would be immediately destroyed, but the rest of the Japanese line would probably survive, in no small part because of the narrow exposure (bow or stern) to the blast. Escorting cruisers and destroyers would suffer badly from broadside effects, but the extent of damage would depend on the distance between the columns. Columns of cruisers and destroyers operating at 700 yards distance on either side of the battle line would suffer badly from a direct hit, especially given the exposure of their vulnerable broadside. Columns operating at 2000 yards (as was often Japanese practice) would suffer only minor damage from the blast.

It is clear from the Able test that even within a thousand yards, the detonation of an atomic weapon would not destroy a modern battleship, or even cause enough damage to disable it. Without damage control (and in some cases without recent repairs), HIJMS Nagato, USS Nevada, and USS Arkansas survived Able. Radiation was a different story, however. The lethal effects of radiation would extend to nearly 1500 yards, encompassing much of the Japanese line. Able tested this, with goats tied on USS Nevada, exposed at 650 yards, surviving for four days before succumbing.

To be sure, most of the crews would survive the immediate blast, especially given the protection of the hulls. Still, conditions upon the surviving battleships would have been grim, with almost the entirety of the crew suffering from debilitating illness and injury, and quite possibly unable to perform their duties with any alacrity. And even if the elements of the fleet had somehow survived and returned to base, the IJN would have lacked the capacity to restore the ships to service. Most would have remained so contaminated by radiation as to be completely unusable for years.

What if the United States had decided to direct its atomic attack against Kido Butai, the IJN’s carrier force? The problems and opportunities would have been considerably different. Less sturdily built that battleships, carriers were more vulnerable to the effects of atomic blasts than their cousins. Aircraft on deck would be swept away or lit on fire, and wooden flight decks would suffer badly. During the Able Test, USS Saratoga (a good analog for most of the Japanese carriers) suffered disabling fires and other damage at a range of some 2,200 yards. USS Independence, at 560 yards, was completely disabled. Just as important, aircraft carriers require interaction with exposed surfaces in order to operate. This would make crews far more susceptible to radiation than their compatriots inside battleships.

However, the Japanese carrier force would benefit immensely from its greater dispersal, relative to the battlefleet. IJN carriers normally operated at a range of around 8,000 meters from one another, in an irregular box formation. In practical terms, this means that even a direct hit on one of the carriers would result in the destruction of only a single ship. A bomb dropped halfway between two carriers might cause sufficient damage to aircraft on deck to disrupt operations, but probably would not put either carrier out of service for an extended period of time. Escorts would suffer badly, but the carrier force itself might well remain operational in the wake of an atomic attack.

Under very specific circumstances and with a little bit of luck, an atomic bomb could have inflicted extreme damage upon a battle-worthy Imperial Japanese Navy in 1945. Unfortunately, the bomb would have the most lethal impact on the oldest, least useful part of the Combined Fleet, the battle line. Against the carrier fleet, atomic weapons could at best hope to destroy single vessels, something that the U.S. Navy could already do with its torpedo and dive bombers. Altogether, the USN and USAAF would have been best advised to use any available atomic weapons on Japanese port facilities, which would undoubtedly destroy some ships while at the same time rendering the ports militarily useless for an extended period of time.