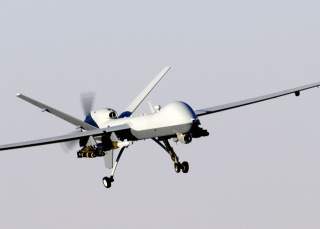 Key point: The attack on Saudi Arabia was sophisticated and managed to avoid air defenses.

THE MIL & AERO COMMENTARY – A coordinated drone attack on important Saudi Arabian oil-treatment facilities by weaponized unmanned aerial vehicles (UAVs) on 14 and 15 Sept. are yet another warning that operators of vital infrastructure must get serious about anti-drone weapons.

The sophisticated drone attack, which involved 19 separate accurately targeted detonations, not only has sent world oil prices sharply higher, but also opens a new era of killer UAV attacks. This attack certainly won't be the last.

Could anti-drone defenses in and around these oil-treatment facilities at Saudi Aramco's oil plant in Abqaiq, Saudi Arabia, and two at the nearby Khurais oil field have thwarted these attacks? It's hard to say.

The issue involves not just air defenses against UAVs, but against many UAVs coming in from different directions at nearly the same time. Such saturation attacks have the potential to overwhelm standard handheld and mobile drone defenses, even if the attack can be detected in the first place.

There's no report I've seen that anyone in or around the Saudi oil facilities had any idea an attack was in progress until the first impacts. It's safe to assume these attacks took Saudi authorities flat-footed, and it's unclear what measures -- if any -- that Saudi oil industry or military officials might take to prepare counter-UAV forces for any new attacks.

This incident represents a substantial paradigm shift in the tactics that clandestine terrorists or state-backed forces are using in their political and economic war on Western interests. It's also one that even sophisticated Western militaries like the United States are not prepared for.

Most of today's air-defense systems are designed to counter sophisticated threats like high-performance jet fighters and bombers. Even with that, most defenses are not designed to counter saturation attacks that involve tens or even hundreds of incoming aircraft or missiles.

It's not clear how many killer drones were involved in September's attacks on Saudi oil facilities, but it certainly was more than a few, judging from the times and precision of the impacts. The attack might have involved as few as 19 or 20 UAV weapons, probably no more than 30.

Now consider what happens if the next attack involves hundreds of UAVs. These aircraft typically are small, have tiny radar cross sections, and operate relatively close to the ground or surface of the ocean. They're very difficult to detect because they can hide in ground clutter. A coordinated UAV attack, or perhaps even a swarm of UAVs, is tailor-made for a surprise overwhelming attack.

Are kinetic anti-air weapons like missiles technologically or economically viable to defend against drone attacks? Probably not. An anti-aircraft missile probably is far more expensive than the drones they'd be shooting at, and that's just the beginning.

It may be that laser weapons and high-power microwaves could be one solution to drone attacks. Laser weapons could attack separate incoming targets relatively quickly. High-power microwaves, on the other hand, have the potential to fry the sensor and navigation electronics of clouds of incoming UAVs -- kind of like bug spray against swarms of mosquitos -- and just as dangerous to unintended targets nearby.

Does it make economic sense to develop and deploy these kinds of counter-UAV defenses, though, and if so, where? Do we consider these kinds of defenses for civil and military airports, government buildings, energy infrastructure like oil fields and refineries, hydroelectric dams, or crowded sports stadiums? How much would all that cost?

These are viable questions, and the time to consider them is now. It's only a matter of time before the next drone attack hits, and the next one is likely to be a lot bigger.