Attack! This Video Proves Nothing Can Stop an A-10 Warthog 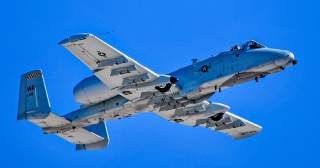 Richard Pauly, who was then a Major with 706 Tactical Fighter Squadron, was one of the A-10 pilots involved in the mission recalls: “I was the #2 aircraft. I was flying wingman for the squadron commander of the 706 TFS that day. The visibility was so bad past the FLOT that we could only use our guns. The MK-20 Rockeye we were carrying was not deliverable since we were so low to maintain visual contact with the Iraqi armor.

“The flares my flight was using was mainly to regain visual contact with each other in the murk. Every now and then I would lose track of lead (and vice versa) and I would ask him to pop some flares so I could reacquire him. If we couldn’t see each other then, we would go back over the friendlies where the visibility was better and go back in after the Iraqi’s.

“It was pretty hairy in there at times. We also scouted further past the FEBA for the Brigade commander.

“I almost ran out of fuel after we Bingo’d out as KKMC’s runway was fouled by a gear up F-16. We found a tanker about the time I was seriously contemplating landing on Tapline road.

“With that said, the wingman of the morning flight near there received an SA-16 and he crashed on landing at KKMC. I saw the wreckage there when we landed at KKMC to re-arm. Once we did so, we took off and no one needed us, so we took the ordnance back to King Fahd. The fighting had petered out.”

The Fairchild Republic A-10 Thunderbolt II was designed for close air support (CAS) of friendly ground troops, attacking armored vehicles and tanks, and providing quick-action support against enemy ground forces. It entered service in 1976 and is the only production-built aircraft that has served in the U.S. Air Force (USAF) that was designed solely for CAS. Its secondary mission is to provide forward air controller – airborne (FAC-A)support, by directing other aircraft in attacks on ground targets. Aircraft used primarily in this role are designated OA-10.

The A-10 was used in combat for the first time during Operation Desert Storm in 1991, destroying more than 900 Iraqi tanks, 2,000 other military vehicles and 1,200 artillery