In Attacking Yemen War, Some Americans Call for Abandoning Allies 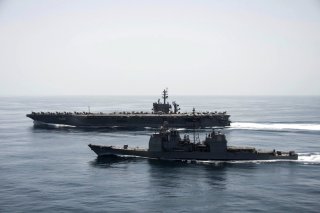 Politico’s “National Security Daily” reported on October 6 that the Yemeni Alliance Committee and the Yemeni Liberation Movement had joined CODEPINK and Just Foreign Policy in calling for a more strict version of the pending National Security War Powers Act (NSPA). The legislation, which is sponsored by Senators Bernie Sanders (I-VT), Chris Murphy (D-CT), and Mike Lee (R-UT), would further limit presidential authority in regard to U.S. participation in foreign military operations. The arguments offered by the Yemeni activists start from an odd point, claiming that Yemeni Americans and other marginalized groups “were excluded from the overwhelmingly white American group that advised in the drafting process.” On Murphy’s website, the majority of the experts expressing support for the NSPA aren’t people of color, they note. This is in line with what has become obligatory “woke” rhetoric for any topic.

Their second point gets to the real issue, keeping President Joe Biden or any future commander-in-chief from providing support for the Saudi Arabian-led Arab coalition that is opposing the takeover of Yemen by Iranian-backed Houthi insurgents. The activists say that while the NSPA requires the president to seek congressional authorization to enter a war zone if the United States plans to be “party” to a conflict, any administration can say they are not such a party as the activists claim the Biden administration is doing now—even though “U.S.-authorized contractors are helping to keep the Saudi air force in the skies.”

These four groups are not really concerned about whatever constitutional arguments are involved in the war powers debate, and they are certainly not wedded to “peace” in any abstract sense. They are opposed to American action in support of its national interests or that of its allies and are working to influence domestic political change to advance the causes of foreign interests, particularly those of Iran.

The California-based Yemeni Alliance Committee’s (YAC) advocacy of peace in Yemen did not start with the aggression of the Houthis against the legitimate government of the country. Instead, the YAC began its one-sided activism only in 2014, after years of violence and insurgency, when the Saudi-led coalition intervened following the Houthi’s capture of the Yemeni capital city of Sana’a. The YAC lays the blame for the humanitarian crisis the war has created entirely at the door of the Saudi-UAE coalition and never mentions the Houthis. They call for the United States to end all support and arms shipments to the Arabs, but never mention Iran’s arming of the Houthis.

The Yemeni Liberation Movement has been even more vehement in its anti-American language. This group is based in Detroit and proclaims, “We realize our people in Yemen, Palestine, Iraq, Haiti, Venezuela, Somalia, Ethiopia, Minnesota, Jackson, Chicago, Detroit, to name a few, are victims of the same U.S. imperialist project murdering our babies here and starving our babies in Yemen.”

CODEPINK has also taken a one-sided view of peace. It holds that “The U.S. war machine greatly harms the planet and the people of the world.” In particular, the group opposes any harm to Iran and have launched a “We love Iranians” campaign to end all sanctions on the Tehran regime. The group also wants a return to the Iran nuclear agreement, an end to Israeli “sabotage” of Iranian nuclear research, and a halt to attacks on Iranian-backed militia groups in Syria. And, of course, no more U.S. support for the Saudi coalition in Yemen. Just Foreign Policy’s (JFP) two main campaigns are to stop any U.S. “war” with Yemen and Venezuela, but it also wants a return to the Iran nuclear deal and an end to sanctions on Tehran. At its core, JFP believes “U.S. foreign policy therefore threatens to impede—perhaps as never before—the country’s economic and social progress. We cannot afford to leave it in the hands of the ‘experts’ without influence from the public.”

It would seem the Biden administration would be an easy sell for this “antiwar” movement. At a February 5 press briefing only days into the new administration, State Department spokesperson Ned Price concluded his review of statements about “ending all American support for offensive operations in Yemen, including relevant arms sales” and ending “our intelligence sharing arrangement with Saudi Arabia and the Saudi-led coalition.” As an afterthought, he did concede that “Saudi Arabia faces genuine security threats from Yemen and from others in the region.” Yet, the strategic position of Yemen which led both the Obama and Trump administrations to provide aid (including intelligence sharing, aerial refueling, and precision-guided munitions) to the Saudi-led coalition has prevented the Biden administration from completely abandoning the conflict. Yemen sits at the outlet of the Suez Canal-Red Sea maritime link between Europe and the Indo-Pacific. It is one of the most strategic spots on the map under threat from Iran. Yemen is also on the border of Saudi Arabia, and the Houthis have launched numerous missile and drone attacks on Saudi oil facilities that serve global markets and on commercial shipping in the Red Sea.

The State Department knows “The Houthis benefit from generous military support from the Iranian government to wage attacks against civilian population centers and commercial shipping.” In May, sanctions were imposed “against two senior leaders of Houthi forces in Yemen who are involved in military offensives that exacerbate the humanitarian crisis, pose a dire threat to civilians, and destabilize Yemen.” Secretary of State Antony Blinken has called on Tehran to pressure the Houthis to negotiate, but the situation has continued to escalate since Iran apparently has no fear of America taking effective action to back its diplomacy.

The United States and UK blamed Iran for a direct attack on an Israeli-owned (Liberian flagged) oil tanker in the Arabian Sea off the coast of Oman on July 29. The ship was damaged by suicide drones using tactics commonly employed by the Houthis. It was escorted to safety by ships from the Ronald Reagan Carrier Strike Group which had been redeployed from its usual area of operations in the Indo-Pacific to the Fifth Fleet to cover the withdrawal from Afghanistan.

The Fifth Fleet is the naval arm of Central Command and appears focused on the Persian Gulf and the outward flow of oil to the world. However, it also protects the sea route that connects Europe to the Indo-Pacific. For example, in late April, U.S., French, British, and Australian naval forces jointly conducted mine countermeasures exercises in the Arabian Gulf. Earlier, the Dwight D. Eisenhower Carrier Strike Group conducted dual-carrier flight operations with France’s Charles de Gaulle Carrier Strike Group in the Arabian Sea off the coast of Yemen near the outlet of the Red Sea. On May 9, the Fifth Fleet cruiser USS Monterey intercepted an arms shipment from Iran to the Houthi insurgents. On July 1, Vice Adm. Brad Cooper, commander of U.S. Naval Forces Central Command/Fifth Fleet, discussed maritime security issues with officials from Yemen, the Gulf Cooperation Council, and Saudi Arabia in Riyadh. On July 27, U.S. Special Envoy Timothy Lenderking arrived in Riyadh to discuss with Saudi and Yemini officials the import of fuel into northern Yemen for civilian use and the need for the Houthis to end their manipulation of those imports at a time when the insurgents were conducting offensive operations exacerbating the humanitarian crisis. The Houthis control the port of Hodeidah on the Red Sea and the Saudi coalition has blockaded it. In December 2018, an agreement between the Yemen government and the Houthis rebels brokered by Sweden called for the Houthis to withdraw from Hodeidah with a general ceasefire in the area to allow delivery of aid under UN supervision. But this has not happened. The Houthi still hold the port, creating the risk of mass starvation.

That the political movement against U.S.-Saudi cooperation is about more than just Yemen was revealed when Sen. Murphy, chairman of the Subcommittee on the Near East, penned an essay for Foreign Affairs in February. He called on Biden to “seriously consider reducing its military basing in the region. Reconsidering the costs and benefits of basing the Fifth Fleet in Bahrain would be a good start, as the United States’ massive footprint is becoming more trouble than it is worth.”

Yet, the position of the United States in the region is strong. With Israel and the Sunni Arabs aligned against Iran, there are coalitions of the willing looking to Washington for aid and support. They are willing to carry much of the burden of confronting common threats (including combat) in what is still a major theater in global great power competition. In the wake of the Afghan debacle, adversaries are encouraged to believe that if America withdraws, its local allies will collapse. And this consideration should be the prime topic when experts and the public debate legislation like the National Security War Power Act. Those who oppose U.S. leadership in world affairs hope it will open the door for the advance of adversaries. Is that what Americans want?