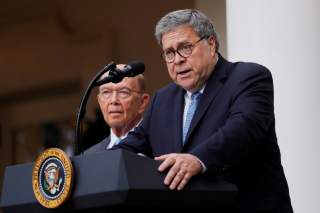 Attorney General William Barr blasted the “completely irresponsible press” Tuesday as well as the FBI for their respective roles in pushing the debunked theory that the Trump campaign colluded with the Russian government in 2016.

Barr said in an interview with NBC News he disagreed with a Justice Department inspector general’s report, released Monday, that said the FBI had a legitimate rationale to open an investigation into Trump campaign associates in July 2016.

Barr said he believes the FBI may have acted in “bad faith” in opening the investigation.

“I think there were gross abuses … and inexplicable behavior that is intolerable in the FBI,” Barr told NBC News. “I think that leaves open the possibility that there was bad faith.”

The inspector general’s office said the FBI had a proper predicate for opening the investigation; however, the report also laid out extensive evidence of FBI agents omitting and withholding information regarding the Steele dossier, which the bureau used in applications to conduct surveillance against former Trump campaign adviser Carter Page.

Barr doubled down in the interview on remarks he made earlier this year that he believes the U.S. government spied on Trump campaign associates.

“It was clearly spied upon,” Barr said of the FBI’s actions towards the Trump campaign. “That’s what electronic surveillance is … going through people’s emails, wiring people up.”

Barr criticized the press on two fronts. He faulted the industry for largely ignoring the parts of the inspector general’s report that undercut the collusion conspiracy theories. He also accused news outlets of overhyping allegations of Trump-Russia collusion.

He lamented that the inspector general’s report has not been “accurately reported by the press over the last day.”

Barr also added: “I think our nation was turned on its head for three years based on a completely bogus narrative that was largely fanned and hyped by a completely irresponsible press.”

The special counsel’s report, which was released on April 18, said there was no evidence that the Trump campaign conspired with Russia or that any Trump associates acted as agents of Russia. The FBI opened its investigation on July 31, 2016 to find out whether anyone on the campaign was working with Russia to hack and release Democrats’ emails.

As part of the probe, the FBI relied heavily on the unverified Steele dossier to assert that there was probable cause to suspect that Page was conspiring with Russia to release emails.