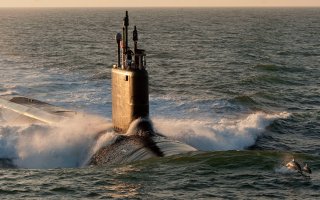 Although Australia does not have nuclear weapons and won’t acquire them in the future, the benefits of nuclear-powered submarines are just too great an opportunity to pass up.

Nuclear Subs Down Under?

In a joint statement, the United States, United Kingdom, and Australia announced the formation of a new trilateral security partnership called AUKUS, which will focus on strategic interests in the Indo-Pacific region.

Although the three countries already share significant defense and security ties, the new partnership underscores the depth of understanding and shared interest the United States, UK, and Australia have in presenting a united and capable front in the face of increased competition from China.

Why the Change of Heart?

Before the trilateral AUKUS announcement, Australia had a deal to replace the Royal Australian Navy’s aging and problematic Collins-class submarines with a conventionally-powered version of the French Barracuda-class submarines. These diesel-electric attack submarines—aptly called the Attack-class—faced criticism for their price tag. They would have ultimately become Australia’s most expensive defense program ever, and costs steadily ballooned upwards from initial estimates.

Costs aside, fielding a nuclear-powered submarine greatly expands Canberra’s submarine capabilities. The Australian announcement on the trilateral defense agreement and new submarine program stated that “Nuclear-powered submarines do not have the same limitations that face conventional submarines on weapons storage, speed and endurance. They can stay completely submerged for many months, limiting the opportunities for detection by adversaries.”

Though not explicitly mentioned, the three countries have a deep and shared interest in presenting a united front counter to China.

Importantly, however, the statement underlined Australia’s intent to remain a nuclear-weapon-free nation. “Australia has no plans to acquire nuclear weapons and this proposal will remain consistent with Australia’s longstanding commitment to nuclear non-proliferation.”

Under the auspices of AUKUS, the United States and UK will spend the next year and a half essentially teaching the Australian submarine building industry the ins and outs of nuclear stewardship, after which the focus will be on finding the best way to get “at least eight” nuclear-powered submarines to the Royal Australian Navy.

Though it remains to be seen what kind of submarines Australia would ultimately field, the country could try to leverage proven American or British designs, perhaps tweaked to fit Australian needs better, rather than create a from-scratch design. Off-the-shelf technology would keep costs down and speed up acquisition.

Either way, Australia is uniquely positioned to field a competent nuclear force rapidly. It has a domestic submarine shipbuilding industry and can rely on nearly 125 years of combined U.S.-UK nuclear-powered submarine expertise to help get the new industry on its feet.