The Avengers Go To War: How the Battle of Wakanda Was Won 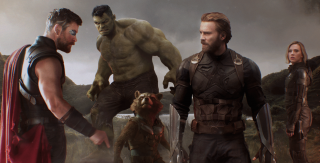 Captain Roger’s performance at the Battle of Wakanda has been widely and rightly panned. But nothing has been said about the profound failures of his enemy, the Thanosians. Despite every possible advantage in manpower, materiel, and circumstance, they still failed. All students of the military art should examine how they so masterfully snatched defeat from the jaws of victory.

The Thanosians had complete freedom in the approach to battle. Nevertheless, they committed two grievous and unforced errors. First, they failed to identify the large energy shield protecting Benin Zana and its immediate environs. This information would have been known with even the most cursory reconnaissance. The mistake cost them at least a battalion worth of troops, when their dropship smashed into it. It is generally agreed that losing a sixth of your force before battle commences is a bad thing.

Second, having noticed the most prominent terrain feature, they deployed to maximise the defender’s advantages. The city of Benin Zana was surrounded to the south and west by open plains, with minimal cover, giving way to jungle. But to the north and east, there was dense, unprotected, urban terrain. Given the Thanosians were predominantly foot-mobile close combatants, these urban areas would have made excellent landing sites. They boasted good cover, proximity to the objective, and could pose collateral damage concerns for the enemy.

Instead of landing there, they instead set down in the jungles to the south. This meant that they would have to cross at least a mile of open terrain in the face of an enemy with fires and air supremacy. This choice discarded good tactical sense in favour of cheap theatricality.

Giving battle on an open plain was problematic. Worse was how the Thanosians disposed themselves. Despite overwhelming numerical superiority (likely 5 to 1, if not more), they concentrated their entire force in one location, directly facing the whole force of the enemy. Given their objective, this was nonsensical.

A far better approach would have been to place three battalions in front of the enemy as a fixing force, and one battalion apiece some distance on the flanks. This would force an unenviable tactical choice for the enemy. If they concentrated on defeating the fixing force, they would be letting two enemy battalions work against their flanks and rear. If they divided themselves to meet the threats, they would invariably be overrun. And if they withdrew, they would become strung-out and poorly positioned.

Any of these scenarios would have substantially helped the Thanosians. Their actual course of action played directly into the enemy’s hands.

Once battle started, there was a glimmer of potential among the Thanosian command – but it was quickly snuffed. They threw their entire force against the energy shield directly in front of the enemy force. This killed most who crossed it, but enough got through to fix the enemy in place. They then detached a force to circle the edge of the shield and attack the enemy rear. Though more prone to error than directly landing units in flanking positions, it showed tactical sense.

The defenders reacted by opening the energy shield in front of them. By doing this, they hoped to make the Thanosians redirect their flanking force into a general melee. The Thanosian command promptly did this. The decision was nonsensical. They had more than sufficient force to maintain the flanking movement while continuing to fix the defenders. This obsession with a decisive clash was the root of their failure.

Even this commitment to an unsubtle engagement was executed incompetently. Aside from their infantry, the Thanosians also had a number of Threshers, sci-fi scythed chariots that could burrow under obstacles – or energy shields. These are kept in reserve until after the defeat of the infantry attack, and then deployed en masse. So far, so sensible as a use of armoured reserves.

However, the calculus changes considerably when realising that the defenders had very limited anti-armour capability. Only two individuals could pose a threat to even one Thresher, and that required extensive and focused fire. Meanwhile, the rest of the defending formation lacked the ability to manoeuvre around them.

If the Threshers had been deployed at the start of the engagement, they would have been able to destroy or rout most of the enemy force in short order. This would have enabled a swift Thanosian victory. Instead, the dithering Thanosian command kept back a battle-winning asset for seemingly no reason. McClellan surely sympathises.

In short, the Thanosians did everything wrong. Despite total freedom of movement, they picked the worst terrain for battle. Despite a free hand in disposition of forces, they chose an unsubtle and inflexible mass. Despite glimmers of tactical potential, they let themselves be lured away by the ghost of decision. And, despite possession of a battle-winning asset from the get-go, they failed to deploy it – from indecision or hubris or both.

Let us hope Thanos does not send his armies to the National Training Center. He would be disappointed by the result.