The Average American Is No Stranger to Health Horror Stories 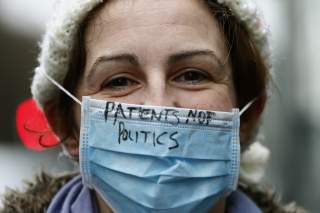 As a debate continues to rage within the Democratic Party over “Medicare for All,” the health insurance has quietly girded itself to fight the elimination of for-profit health care.

In the summer of 2018, trade groups representing hospitals, insurance companies and pharmaceutical makers banded together to form the Partnership for America’s Health Care Future.

Determined to curtail support for universal health care, this group is disseminating messages that single-payer systems like Medicare for All would force individuals off their health care plans, thereby eliminating patient choice.

The trade group argues that the country should “build on what’s working in health care and fix what’s broken – not start over.” That way, Americans can continue to have the “greater choice and control over their coverage and care” that comes from free-market health care.

In appealing to choice, the Partnership for America’s Health Care Future is evoking a value that’s important to many Americans. As a former public relations practitioner, I’ve seen corporations do this countless times in a range of contexts.

It’s often deceptive. But it works.

Freedom as a frame

My research has found that when corporations sense that their viability is threatened, they often frame the free market as the optimal venue through which Americans can pursue and realize their dreams.

They do this by appealing to a core American belief: individual autonomy. This value is remarkably durable. A poll taken in 2015 – just six years after the end of the Great Recession – found that 65% of respondents believed they could attain the American dream through their own individual efforts.

In the late 1930s, the National Association of Manufacturers was the first organization to pursue this strategy in a mass public relations campaign. The industry trade group was concerned that the New Deal’s regulations – and its support for unions – would be bad for business. So over the next several years, the group’s American Way campaign used ads, speeches and op-eds to argue that values like freedom of religion would be threatened by more market regulation.

Such appeals can be compelling, but they’re deceptive. The marketplace cannot be compared with individual freedoms. You can’t simply decide to open a business on a whim or work for an employer of your choosing. There are barriers to entry: You need capital to start a business and you need to be hired for most jobs. But no one needs permission to follow a religion of their choosing.

Nonetheless, the National Association of Manufacturers’ internal polling found that these messages resonated. By the early 1940s, about 75% of Americans indicated that the free enterprise system was essential to their sense of personal freedom.

Now we’re seeing the same story play out in the health care debate.

The Partnership for America’s Health Care Future maintains that Medicare for All would be a “one-size-fits-all approach” that imposes a “government-controlled health insurance system” on Americans. This, it says, would thwart “patient choice” while handing over important health care decisions to government bureaucrats.

There are two prongs to this message. Each highlights threats to autonomy.

The first, patient choice, carries a halo. It would be difficult to imagine arguments against choice.

But a free market health care system already constrains choice. Most Americans under 65 get their health care coverage through work, meaning their employers actually choose what plans are available. Once employees have signed up for a plan, their ability to freely chose their care and providers is often dictated by the plan. Meanwhile, the looming threat of co-pays and deductibles – especially in households living paycheck-to-paycheck – actively discourages people from seeking care. And according to the consumer advocacy group Public Citizen, almost half of Americans with health insurance still had difficulty affording medical care in 2018.

The second part of the message, “government-run health care,” is actually an industry-tested phrase that dates back to the early 1990s, when industry groups fought President Bill Clinton’s proposed health care reforms. Before that period, the phrase was pretty much nonexistent.

In the early 1990s, an association of health care companies, hospitals and drug companies formed a group – much like today’s Partnership for America’s Health Care Future – called the Healthcare Leadership Council. This organization blanketed airwaves with ads that claimed that Clinton’s proposals would “force” people “to pick from a few plans.”

“Having choices we don’t like is no choice at all,” a woman grouses in one of the ads. “If we let the government choose,” a voice-over adds, “we lose.”

Then, as now, health care companies asserted that their private plans were a bulwark against a government supposedly intent on restraining individual autonomy. Of course, as noted earlier, a profit-driven system doesn’t necessarily equate to more choice or better outcomes.

Nonetheless, during the 2020 Democratic primary, even health care reform-minded candidates like Pete Buttigieg have already adopted the industry’s language of “choice” and “autonomy.”

“I will put Americans in charge of their own health care with affordable choices for all,” he wrote in a Washington Post op-ed explaining why he wasn’t backing Medicare for All.

Yet as the health care debate ensues, it’s important for Americans to understand what companies are doing to protect their profits – and how appealing to prevailing cultural values can actually undermine individual well-being.