The Aviation-Centric USS Tripoli is Ready for Fleet Tasking 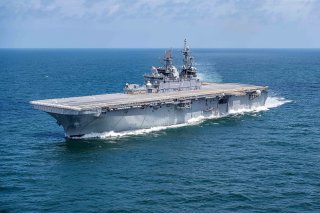 The U.S. Navy’s second America-class amphibious assault ship has completed its post-shakedown availability and is ready for fleet tasking.

“It has a fairly aggressive op tempo as we plan to not only transition that ship to the fleet, but ultimately transition it into fleet tasking, where we'll look to see all sorts of capabilities displayed on that platform later this spring,” McNeal said.

The USS Tripoli follows the USS America (LHA-6) amphibious assault ship, which was commissioned in 2014. McNeal explained that Tripoli’s ability to deploy vertical-take-off-and-landing F-35Bs and other radar and command and control technological advancements, gives the ship the ability to broaden its mission scope.

“We can talk about small-scale contingency operations supporting the expeditionary strike group in a forward-deployed manner,” McNeal said. “We've seen a lot of that with (USS America) as of late, or we can talk about full-on wartime operations where LHA is a part of a larger expeditionary naval force. Regardless, this ship will remain a centerpiece of any of those scenarios going forward into the future.”

The USS America has previously deployed with as many as fifteen F-35Bs aboard. Modifications were made to America to ensure the deck could withstand the heat of an F-35Bs vertical take-off and landing, and several of the ship’s structures were reinforced to support the aircraft. The ability to deploy the F-35B, supported by helicopters, drones and V-22 Ospreys, is one of the capabilities that sets the America class apart.

“You can see some of the aviation capabilities represented on this platform,” McNeal said. “First and foremost, you see the F-35, the Joint Strike Fighter, we've learned a heck of a lot with LHA-6 as it has been deployed just over the last few years of operating JSF. We've taken all of those lessons learned into consideration. We worked a lot on this post-delivery with LHA-7.”

As naval aviation platforms, America and Tripoli are built with increased hangar space to house aircraft and support a higher tempo of flight operations.

These first two aviation-centric amphibs are intended to set the stage for the USS Bougainville (LHA-8), which will include a well deck to support ship-to-shore amphibious operations.