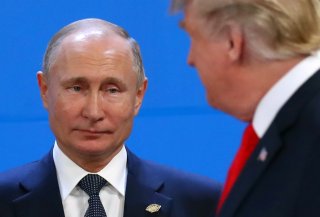 The coronavirus challenge—the pandemic itself and the resultant economic shock—puts a stress test on individuals, societies, countries, alliances, and the international system—and precedents are sobering. The infection curve may be starting to bend, but economic shock and political dysfunction may lead to a global Great Depression. Last time the world had one of those, the United States had withdrawn from responsibility in the world (something President Donald Trump seems to find tempting). Democracies then seemed to be defensive and floundering; the dictators then felt their time had come; and from these failures came world war and cold war. The United States and its free world allies had better get it right this time around.

This is the context in which Steve Krasner, State Policy Planning Director during the second Bush term (someone we have worked with and respect), has written a piece in Foreign Affairs (“Learning to Live with Despots”) that advocates realism as the guiding principle of U.S. foreign policy. He means by this less U.S. emphasis on democracy in the world (which he calls an attempt “to remake other countries in the American image”) and more emphasis on achieving practical results with non-democratic states: more security, stability, economic growth, and fewer transnational threats (e.g., terrorism, proliferation, and drug trafficking).

The tagline of Krasner’s article is that “Washington should [adopt] a foreign policy that keeps the country safe by working with the rulers the world has, not the ones the United States wishes it had.”

Who can argue against dealing with the world as it is? Or against seeking practical results in foreign policy? Being realistic is a necessary condition of successful foreign policy. Making progress on practical areas of common interest, even with non-democratic states, is part of any reasonable diplomatic action plan. This looks obvious at a high level of abstraction. But “Realism” as a doctrine, as Krasner advocates it, doesn’t look so good as the consequences emerge.

Krasner explains that the United States should help other countries boost their security, economic growth, and deliver some services “while nevertheless accommodating a despotic ruler.” He spells it out in admirable frankness what this means: no elections is no big deal (“pushing for elections often results only in bloodshed.”); go easy on corruption (“Trying to eliminate corruption entirely may preclude eliminating the worst forms of corruption”); individual rights are expendable (“greater security may mean more violations of individual rights”); and therefore, in sum, “Washington can succeed only if its policies align with the interests of local rulers; in most cases, those rulers will be despots.

Russian president Vladimir Putin, Chinese president Xi Jinping, and Saudi crown prince Muhammad bin Salman could not be more pleased. Ignoring political prisoners, withdrawing support from press freedom, turning a blind eye to concentration camps (e.g., for Uighurs in China), and letting Putin’s security services violate individual rights through the occasional assassination are logical consequences of Krasner’s argument. He may claim he doesn’t mean this, but long experience tells us that his accommodationist doctrine would result in these and other baleful results.

America has gone down this dark path before. During the Cold War, it often supported dictators who were reliably anti-communist. The United States had no problem with the Greek military coup in 1967, but our indifference alienated a generation of Greeks, and we’re only climbing out of that hole. We may have had good reasons to back the Shah of Iran, but did we have to turn such a blind eye to his abuses and ignore the dissidents in Iranian society?

Foreign policy is not for those who demand purity; tradeoffs are part of it. But though short-term and practical demands may lead Washington to deal with flawed rulers, the United States should never mistake short-term necessity for long-term goals.

Support for democracy is not about trying to remake countries in the U.S. image.

It’s about recognizing, as has U.S. grand strategy since at least 1945, in theory and often if not always in practice, that American interests advance with American values; that a rules-based world that favors democracy will work better for the United States than one in which great powers simply carve out spheres-of-influence and manage client states they dominate through force and fear, often working through local despots.

Democracy is not just elections: it is rooted in the rule of law and effective institutions that implement it. Governments that rest on such a foundation will be more successful, richer, and thus better partners for the United States than ones that don’t.

Support for democracy doesn’t mean refusing to work with any but advanced democracies. The United States must work with President Abdel Fattah el-Sisi’s Egypt and Saudi Arabia’s sometimes murderous Prince Muhammad bin Salman. But let’s not fool ourselves about the nature of such partners nor assume that the stability they preside over today will go on forever.

The United States and its allies may have to work with authoritarians, but let’s couple that with doubling down on investment in democracy, including in authoritarian countries. This isn’t regime change by force, but sustained support for pro-democracy activists striving for the same values for which Americans have fought so valiantly: life, liberty, and the pursuit of happiness. We’ve done this before: during the Cold War, realism accepted that the Soviet Union’s communist empire in Europe was eternal. The policy of détente did not challenge that and kept the United States apart from issues of Soviet repression in favor of pursuing strategic stability and trade. But America won the Cold War when it learned to pursue dialogue with the Soviets while simultaneously supporting dissidents in countries across the Warsaw Pact. Soon, our democracy-minded friends in Poland and elsewhere overthrew communist rule. We all shared in the benefits of a continent no longer divided.

Support for democracy comes from recognition that countries’ external behavior reflects their internal arrangements. In the 1930s, the internal authoritarianism of Germany, Italy, and Japan was bound up with their external aggression. Democratic Germany, Italy, and Japan became among America’s best friends after 1945. Putin’s external aggression (and hostility to the United States) is bound up with his despotism at home: he needs to keep democracy far away from Russia to maintain his unchallenged rule-for-life. We must do our best to stabilize relations with the Kremlin. There may be areas of common interests even now. But better relations with Russia will require a better Russia.

The challenges of the coronavirus force thought about what counts. America and the world have prospered for seventy-five years because we and our best friends—fellow democracies—built and maintained an international order rooted in common values. We should not abandon that tradition for the sake of aligning ourselves with despots. We should not retreat from our best traditions for the sake of short-term fears, lack of confidence, or a cynical calculation that we must settle for transactional relations. The higher realism of seeing our interests and values as ultimately linked is the American way.

Ash Jain is a senior fellow at the Atlantic Council’s Scowcroft Center for Strategy and Security, where he oversees the Democratic Order Initiative.  He served previously as a member of the Secretary of State’s Policy Planning Staff.