The B-1B Bomber Will Have Hypersonic Missiles 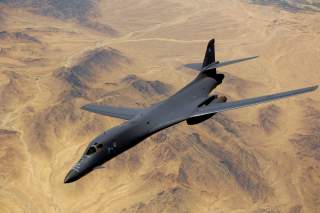 Key point: Hypersonic missiles will expand the destructive power of the B-1B bomber.

EDWARDS AIR FORCE BASE, Calif. – The B-1B jet bomber fleet may be tired and war weary after constant deployments overseas, but the U.S. Air Force is continuing to look at how to improve the aircraft's weapons payload as it enters the back end of its career. The Drive reports. Continue reading original article

11 Sept. 2019 -- This goes far beyond adding new avionics to its flight deck, new sensors, and communications gear. The flying force is now exploring ways to give the heavy-hitting Bone even more magazine capacity than it already has and the ability to carry outsized hypersonic missiles in its internal weapons bay.

The core of these exploratory efforts is centered around two latent features that were built into the swing-wing bomber's design many decades ago. The B-1B was built with external hardpoints to carry large nuclear-tipped cruise missiles.

These hardpoints were never really activated in a significant manner operationally, that is aside from the one under its right 'neck' area that it has used to mount the Sniper Advanced Targeting pod in recent years. The cruise missile racks themselves were pulled out of service completely following the B-1B losing its nuclear delivery role due to the START treaty.