The B-21 Raider's First Flight Must Wait 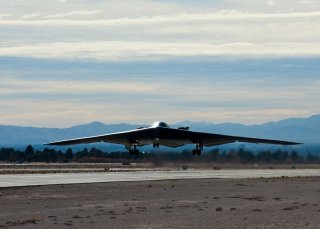 The B-21 Raider, currently being developed by Northrop Grumman, is the American military’s next-generation heavy bomber. Expected to enter service in 2026 or 2027, the plane is called Raider in a tribute to Lt. Col. Dick Cole, the last surviving airman from the famous Doolittle Raid. The “21” refers to its status as a twenty-first-century bomber.

“When it comes to delivering America’s resolve, the B-21 Raider will be standing by, silent and ready,” Northrop’s website says. "We are providing America’s warfighters with an advanced aircraft offering a combination of range, payload, and survivability. The B-21 Raider will be capable of penetrating the toughest defenses to deliver precision strikes anywhere in the world. The B-21 is the future of deterrence.”

However, news broke this week that the B-21 Raider will have its first flight a bit later than previously planned.

According to Air Force Magazine, which cited a service spokesperson, the date of the first flight has been pushed back to 2023.

“Recently, the Air Force released a new estimate for first flight; projected for next year, 2023,” the spokeswoman told the magazine. “This estimate reflects the current status of the program,” the spokeswoman added, although no specific reason was given for the delay. It was said that supply chain concerns had not affected the B-21 program.

The plane, the report said, “remains within its acquisition program baseline for cost, schedule, and performance established at Milestone B award, which was based on an independent government estimate for the program.”

The spokeswoman also told the magazine that the timing of the first flight will be “data- and event-driven, not a date-driven event.”

“The B-21 program continues to ensure the first flight test aircraft is a high-quality build and production-representative, in order to drive an efficient flight test campaign and rapidly field this critical combat capability,” the spokeswoman added, per Air Force Magazine.

Earlier this year, Secretary of the Air Force Frank Kendall revealed that a bomber drone might eventually fly alongside the B-21 Raider. However, Kendall added that there remains “more work to do” on the concept.