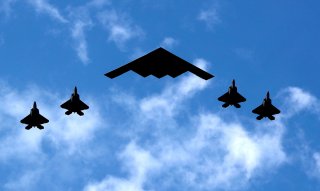 It is destined to be a sight to behold, a display of unrivaled aerial firepower and tribute to the evolving diversity and longevity of the U.S. Air Force bomber force. You could call it a synergy, or alignment of sorts, between unparalleled athletic prowess and U.S. military superiority . . . all in the name of America.

The Air Force has announced that a classic B-52 bomber, B-1B Lancer and B-2 stealth aircraft will fly together over the Super Bowl at the conclusion of the U.S. national anthem.

“Supporting this event is a tremendous honor for our command and the U.S. Air Force,” Gen. Tim Ray, the commander of Air Force Global Strike, said in a service statement. “We look forward to this opportunity to showcase the reliability, flexibility and precision of our bomber fleet to the nation during this exciting event.”

It is being called a “trifecta bomber flyover.” The B-2 jets participating in the trifecta are from Whiteman Air Force Base in Missouri, which is somewhat near Kansas City. They will, of course, not favor either team but instead represent the collective, nationwide interest in celebrating American power.

The choice to align the respective flight paths of these bombers, coming from disparate locations, is part of a deliberate effort to showcase U.S. bomber fleet readiness and deployability. The Air Force statement even said that, while the event is first and foremost a Patriotic tribute, it is also a “time-over-target” training exercise for pilots, aircrew and ground control teams.

Coming all the way from the midwest, and North and South Dakota does seem to demonstrate the effect of long-range deployability, a trademark of the U.S. bomber fleet; B-2s famously became known for flying missions all the way from Missouri to the small island of Diego Garcia off the coast of India during Operation Enduring Freedom.

Certainly, such a combat deployment radius, traversing thousands of miles across the continental U.S. does further demonstrate that, in a single mission, U.S. bombers could easily operate over Russia after taking off in Europe, or reach China from Guam or even Hawaii.

It seems significant that existing bombers are the chosen platforms for the flyover, given that the Air Force continues to make vigorous efforts to upgrade, sustain and modernize these three decades-old aging platforms to continue operational service for many years into the future—or at least until sufficient numbers of the new B-21 arrive. Many senior Air Force leaders have, for quite some time, voiced concerns about the age of the bomber fleet and called for an ongoing acceleration of the B-21 bomber, as well as a potentially larger buy of B-21 bombers.

The three chosen bombers, the B-2 and B-52 in particular, are basically completely new aircraft when compared to when the first emerged on the operational scene. The Vietnam-era B-52, for example, is being re-engined, getting an entirely new internal weapons bay, receiving an entire new generation of networking and communications gear and, of course, being armed with new air-dropped, precision-guided bombs and cruise missiles. The B-2, still very much in the process of a complete overhaul, is receiving 1,000-fold faster computer processing speed, upgraded B-61 Mod 12 nuclear weapons, new sensors with greater range and fidelity and a Defense Management System technology built to inform pilot crews of the locations of enemy air defenses.