The B-57: This Was America's First Jet-Powered Bomber 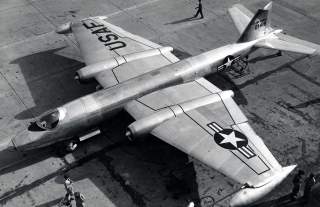 Key Point: The U.S. Air Force officially retired the last training and reconnaissance B-57s in 1982. However, three specially modified WB-57F weather reconnaissance planes have remained active with NASA and were even deployed to Afghanistan in 2012 to serve as airborne command posts (BACANs).

During World War II the speedy deHavilland Mosquito demonstrated that speed and altitude afforded a bomber better survivability than defensive machine guns. In 1944, the manufacturer English Electric began work on a turbojet-powered bomber to bring it to new heights and speeds. The result was a twin-engine Canberra bomber that would see action in dozens of Cold War conflicts.

Though the United States Air Force already had B-45 Tornado jet bombers, it found the Canberra to be superior. The Martin Corporation arranged for license-production and eventually churned out 403 B-57 Canberras of all types.

After the initial near-identical B-57A Canberra, the B-57B main production model entered Air Force service in 1955, differing from the British original in its J-65W-5 turbojets, its tandem seating arrangement under a bubble canopy, and a new rotary bomb rack in the internal bomb bay that could be quickly swapped out between missions.

The Canberra’s cigar-shaped fuselage mounted extremely broad, elliptical wings. These housed eight .50 caliber machineguns, replaced in later models by four 20-millimeter M39 cannons with 290 rounds each. The 13.5-ton jet could lug 6,000 pounds of bombs internally, and up to 4,000 pounds on four wing racks—though it usually operated with roughly half that payload. Furthermore, an air brake assisted dive bombing and low altitude attack runs, though the non-power-assisted controls demanded a lot of the pilots.

The B-57 also sported a then-sophisticated rear-ward facing Radar Warning System, a chaff dispenser for decoy missiles, navigational and targeting radar, ejection seats. The bomber also included a toss bombing computer, allowing Canberras to pull up and chuck a nuclear bomb, then circle away in hopes of escaping the blast. Indeed, B-57s were rushed to Cold War hotspots during crises in Lebanon and over the Taiwan Straits.

Impressively, the B-57B’s maximum speed of 580-600 miles per hour and a service ceiling of 48,000 feet high matched first-generation F-80 jet fighters, but the Soviet-built MiG-15s encountered over Korea were faster and could fly just as high. Thus the B-57B and the similar B-57C and E trainer and target tug models began to be replaced by supersonic fighter-bombers after only three years in service.

However, specialized reconnaissance Canberras proved more long-lasting, particularly the RB-57D which had gigantic 103-foot wide wings allowing it loft up to 70,000 feet high. These flew on strategic spy missions over the Soviet Union and China that lasted up to seven hours—though a Taiwanese RB-57D became the first aircraft destroyed in combat by a surface-to-air missile. An even larger RB-57F with 122-foot wide wings was also deployed, but the type was mostly replaced by the legendary U-2 spy plane.

The last two B-57B units, the 8th and 13th Bomber Squadrons, were deployed to Clark Air Force Base in the Philippines. After two apparent clashes between North Vietnamese and U.S. Navy (one later found to be a false radar contact), American President Johnson ordered a retaliatory naval air strike and had these B-57s deployed to Bien Hoa airbase on August 1964, despite a treaty forbidding deployment of U.S. warplanes to Vietnamese soil.

This and other incidents spurred the Johnson administration to counter-escalate. On February 19, 1965, B-57s struck Viet Cong targets in Phuoc Tuy Province. This was not only the first U.S. Air Force bombing raid of the Vietnam War, but the first ever airstrike ever performed by U.S. jet bombers.

B-57s could interdict traffic for four hours at a time using conventional bombs, napalm, rocket pods, and M35 and M36 incendiary cluster bombs that could shower a football-field-sized area with 180 thermite bomblets. A Vietnamese prisoner, shown the silhouette of the noisy jet, once reportedly said, "The screaming bird. It is the worst. It stays over the target so long. And it never runs out of bombs."

But the night raiders faced thousands of cheap and effective automatic flak cannons deployed across Vietnam. These defenses were especially thick in North Vietnam, so much so that a special patch was devised to commemorate veterans of those raids.

For instance, The B-57 piloted by Larry Mason narrowly averted disaster on a mission over Tchepon, Laos, as he described in a letter to his wife:

Flak knocked out one turbojet and set another aflame, disabled the landing gear controls, and badly wounded navigator Jere Joyner in the arm and leg. Realizing Joyner wouldn’t survive an ejection, Mason limped his jet back to base and braced himself for a belly landing—only to discover that enemy fire had fortuitously jarred his landing gear down!

The South Vietnamese Air Force (SVAF) also received several B-57s after a handful of personnel were hastily trained in their operation—including future Prime Minister Nguyen Cao Ky. The SVAF B-57s launched a single raid for propaganda purposes flown by American pilots. However, efforts to train Vietnamese crew were unsuccessful. After unit commander Major Nguyen Ngoc Bien was run over by his own bomber in a parking accident, the B-57s were transferred back to U.S. service.

The worst B-57 accident by far occurred May 16, 1965, when a bomb detonated onboard a Canberra queued for takeoff at Bien Hoa, starting a chain reaction of explosions that annihilated two squadrons-worth of aircraft (ten B-57s, eleven A-1H Skyraiders, and an F-8 Crusader) and killed thirty-four personnel. Afterwards, B-57s were transferred first to Da Nang and then Pho Rang airbase, and reassigned to hit targets primarily in South Vietnam.  During this period, Canberra crews reportedly were accompanied by the legendary Chuck Yeager.

The B-57s were also joined by the Canberra B-20s of the Australian Air Force’s No. 2 Bomber squadron, which used the call-sign ‘Magpie.' The license-built B-20s had a glass nose through which a third crewmember used a World War II-era bombsight to drop bombs while flying level at high altitude. This method proved surprisingly accurate. The Aussies flew 11,963 combat missions before being withdrawn in June 1971, having suffered only two losses.

By then, the Canberra was growing long in the tooth compared to F-4 Phantom fighters that were faster, heavier lifting and more maneuverable. The 13th Squadron was withdrawn in early in 1968, while the last nine aircraft in 8th Squadron followed in October 1969. Of ninety-four B-57Bs deployed to Vietnam, fifty-one—more than half—were lost, including thirty-eight to enemy fire.

However, the Air Force then upgraded sixteen special B-57Gs with chin-mounted Forward-Looking Infrared Sensors and a laser-designator operated by a third crew member. This new equipment, dubbed ‘Tropic Moon III,' gave Canberra's the capability to precisely target up to four laser-guided Paveway bombs. The guns were removed to save weight, though a side-firing 20-millimeter cannon turret was tested.

The 13th Squadron was reformed, and in October 1970, eleven glossy black B-57Gs were deployed to Ubon, Thailand, and began flying interdiction missions over the Ho Chi Minh trail. Through 1972, they reported destroying 2,000 trucks for the loss of a single aircraft to a likely midair collision—but were outperformed by slower, more heavily armed AC-130 gunships that claimed twelve thousand trucks. While the B-57G was retired, it had helped pioneer night-attack and precision-strike techniques that are now routine in the U.S. military.

The U.S. Air Force officially retired the last training and reconnaissance B-57s in 1982. However, three specially modified WB-57F weather reconnaissance planes have remained active with NASA and were even deployed to Afghanistan in 2012 to serve as airborne command posts (BACANs).