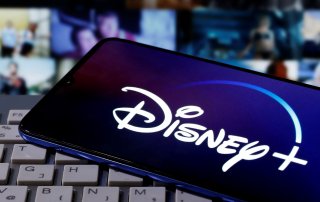 When Disney Plus launched late last year, its parent company believed that it would take about five years to hit 60 million subscribers.

Well, only five months have passed, and Disney Plus has already surpassed 50 million subscribers. Talk about being ahead of schedule.

Is Netflix already shaking in its boots? There indeed could be some cause for concern. In comparison to Disney Plus’ rapid growth, Netflix – currently the largest subscription video service in the world – boasted 167 million global subscribers (60.4 million in the U.S.) at the end of 2019.

That figure indicates that Netflix is about three times the size of Disney Plus, but keep in mind that Reed Hastings’ company launched over a decade ago.

“We’re truly humbled that Disney Plus is resonating with millions around the globe, and believe this bodes well for our continued expansion throughout Western Europe and into Japan and all of Latin America later this year,” Kevin Mayer, chairman of Disney’s direct-to-consumer division, said in a statement.

“Great storytelling inspires and uplifts, and we are in the fortunate position of being able to deliver a vast array of great entertainment rooted in joy and optimism on Disney Plus.”

Disney Plus certainly blasted out of the gate five months ago. The streaming service registered more than 10 million sign-ups in about only a day after it launched in the U.S. and the Netherlands. After three months, it had already garnered more than 28 million subscribers.

According to the company, Disney Plus rolled out in the U.K., Ireland, France, Germany, Italy, Spain, Austria and Switzerland only in the past two weeks. Its most recent launch happened last week in India, where Disney already bagged 8 million subscribers there, as the streaming service is combined with the existing Hotstar service.

The COVID-19 pandemic and the subsequent lockdowns have also played a large role in spurring heightened demand for streaming. For example, Verizon’s web traffic spiked 20 percent in a single week, and on March 31, Nielsen said that streaming viewership skyrocketed 22 percent during the week of March 16 versus the week prior.

The pandemic is also changing how the film business is run. With movie theaters mostly shuttered worldwide, Pixar’s “Onward” was streaming on Disney Plus less than a month after the film’s theatrical release. Disney also announced that its sci-fi fantasy “Artemis Fowl” would head straight to Disney Plus rather than having a traditional theatrical release.