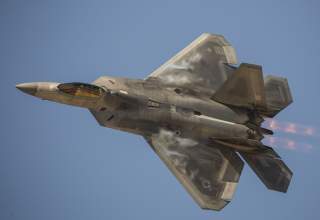 The F-22A Raptor is the U.S. Air Force’s, most expensive, and most capable aircraft ever, but sometimes even the best have a bad day. On Apr. 10, 2006 at approximately 08.15h in fact aircraft 03-041 from the 27th Fighter Squadron (FS) at Langley Air Force Base (AFB), Virginia, had a Red Ball for a canopy unlock indication during pre-flight checks. Attempts to clear the problems by cycling the canopy failed. After the final cycling of the canopy, it remained down and locked position, trapping the pilot in the cockpit. The aircraft subsequently ground aborted.

After all maintenance options were exhausted, the canopy was cut by the fire department and the pilot was freed from the cockpit at approximately 13.15h.

According to F-16.net, screws which had loosened and backed out of their mounting holes were to blame for the stuck canopy on an F-22A Raptor 03-041.

While the chances of another canopy sticking in the closed position on an F-22 are remote, contractors retrofitted longer screws as a preventive measure sometime in the future.

Initial replacement estimates for the canopy were quoted at $182,000, but instead only cost approximately $83,000.